Hawke was ordered by Sturm to attack Green Earth. His campaign in Green Earth brought Black Hole a great deal of territory from the European country. However, he is driven back by the forces of Green Earth's COs Eagle, Jess and Drake.

He later retreats back to Black Hole's headquarters when Orange Star, Blue Moon, Yellow Comet and Green Earth launch a final assault on the base. However, when Sturm attempts to blow up both the Black Hole forces and the forces of the other nations with a bomb, Hawke betrays his leader and kills him before leaving.

Hawke later rejoins Black Hole after the Bolt Guard assumes leadership of the nation. Unaware of who the new leader is, Hawke questions Kindle, who simply teases him and refuses to tell him. Hawke later follows Kindle when she goes to report to Von Bolt. Hawke has a brief conversation with the new leader before Von Bolt has Kindle send Oozium-238s to kill both him and Lash. The two escape and join up with the Allied Nations to oppose Black Hole. Hawke assists the AN in attacking Black Hole's secret base. After Von Bolt is defeated, Hawke steals his chair to prevent Omega Land from being destroyed by the giant Oozium and uses it to restore Omega Land instead.

In Super Smash Bros. Brawl, Hawke appears as one of the game's stickers, increasing damage delivered by hand and foot-based blows when used.

Hawke is a ruthless CO that will do anything to win. At the same time, he objects to fighting if it poses no clear gain. He has proven that he's intelligent and unpredictable and many times he has created brilliant military strategies to defeat his foes. Before he was betrayed by Von Bolt, he was strictly loyal to the Black Hole army. 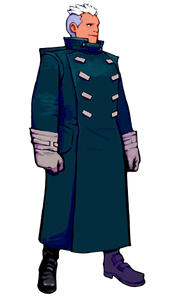