Take over all the clans (failed).

He is a Dark Forest resident, formerly RiverClan Warrior, son of Tigerstar and Sasha, brother of Mothwing and Tadpole and half-brother of Bramblestar and Tawnypelt.

Born to a former kittypet named Sasha, Hawk and his sister Moth, were given up to RiverClan by their mother after their brother Tadpole's death, where they became apprentices and, in Hawkpaw's case, warriors while his sister became a medicine cat, also receiving their new names: Hawkfrost and Mothwing. Hawkfrost then began becoming fascinated with his late father, eventually developing similar power-hungry ambitions. Upon arriving at the lake territories he joined Mudclaw's rebellion, secretly manipulating the former WindClan deputy, while at the same time growing close to his half-brother, Brambleclaw. Hawkfrost began to train with the spirit of his father in the Dark Forest, planning on becoming new leader of RiverClan and goading Brambleclaw into usurping the leadership of ThunderClan, by killing their leader. He orchestrated Firestar's attempt of murder, which backfired when Brambleclaw betrayed his half-brother and killed him, causing him to join their father in the Dark Forest.

As a spirit he assisted in his father's schemes, notably helping him in training and manipulating Lionblaze and Breezepelt, the former of which realised their true intentions and cut ties with them. Hawkfrost also proved himself to be Tigerstar's most trusted cat and helped in training living cats in preparations for the Great Battle. During it, Hawkfrost joined Thistleclaw's patrol in attacking WindClan's camp, where he learned of Ivypool's treachery and attempted to kill her for her betrayal, but got stopped by Hollyleaf, whom he killed. Afterward he got caught by Brambleclaw, who killed him a second time, making him fade away.

He serves as the main antagonist of "The New Prophecy" arc and the graphic novel "Winds of Change", one of the two overarching antagonists of the "Power of Three" arc (along with Tigerstar), the central antagonist in the "Omen of the Stars" arc, the deuteragonist of the novella "Mothwing's Secret", a major character in the "Tigerstar and Sasha" trilogy, a mentioned character in "The Broken Code", and a posthumous antagonist in the novellas "Leafpool's Wish" and "Dovewing's Silence" and super edition "Crowfeather's Trial".

Warriors - Return to the Clans

In "Return to the Clans" he is first seen as a kit with the name of Hawk, later Hawkkit. When his mother Sasha goes hunting, he and his siblings Moth and Tadpole climb into an abandoned Twoleg nest (Human House). It starts to fill with water and Tadpole is able to open the window but slips and drowns in the flood. Hawk then keeps yelling for his dead brother and when he finds out that Tadpole died in the flood, he lets out a yowl of grief.

Moth, Hawk, and Sasha go to a barn which Pine (a rogue) suggests, but they are attacked by cats living there, Hawk's ear getting cut in the process. Quickly, they leave for RiverClan, and Sasha leaves her kits there, but decides Clan life is not for her. In RiverClan he and his sister receive their new names Hawkkit and Mothkit.

In Warriors - The New Prophecy: Midnight, at the Gathering, Leopardstar announces that Hawkpaw and Mothpaw have become warriors with the names of Hawkfrost and Mothwing. His mentor was Leopardstar. When cats from other clans protest Leopardstar tells them all about Sasha and how she left them behind in RiverClan. She says they will not be disloyal just because they were rogues, unlike the past of ShadowClan. Later Firestar tells Hawkfrost that everybody will stop fussing about him and his sister soon. Hawkfrost says that he will try to defend his Clan even at the cost of his life. Hawkfrost is later seen on patrol with the RiverClan deputy Mistyfoot (Later Mistystar) watching WindClan drink from the river, also making sure that they don't steal prey. Hawkfrost says something urgently to Mistyfoot but she shakes her head in reply to whatever he said. The RiverClan patrol greets a ThunderClan patrol consisting Leafpaw and Sorreltail, and Hawkfrost greets them politley. Leafpaw thinks that Hawkfrost reminds her of someone that she knows but she can't make out who it is. Mistyfoot asks if they have seen Stormfur and Feathertail (Two RiverClan warriors) who have gone missing and she is shocked to hear that Brambleclaw and Squirrelpaw (Two ThunderClan warriors) are missing also. Hawkfrost says that they should ask the other Clans if they are missing cats also. The subject later turns to that WindClan has been drinking from the river. Hawkfrost says furiously that they should be driven off but Mistyfoot says that Leopardstar would not allow that. Hawkfrost calms down but still seems angry. Later at the gathering Hawkfrost asks Leopardstar if he may speak. He reports that he saw WindClan warriors taking fish when they were only supposed to be drinking water. Tallstar gets mad that his clan is accused of stealing, but Leopardstar gets angry also and accuses Hawkfrost of lying. As clouds start to cover the moon, everybody calms down and Firestar asks Hawkfrost it he is sure he is not mistaking what he saw. Hawkfrost admits that he could have been seeing things, he still thinks that he is sure of what he saw.

In Warriors - The New Prophecy: Sunset, he is visited in his dreams by Tigerstar, his father. He then asks a ThunderClan cat, Ashfur (who did not know his evil plan) to lead the ThunderClan leader, Firestar, into a fox trap. Firestar gets caught in the trap, and the ThunderClan deputy, Brambleclaw, has a choice of killing Firestar and becoming leader, or saving him and betraying his father Tigerstar and his own half-brother. Hawkfrost's plan backfires when Brambleclaw saves Firestar and kills him. Hawkfrost slides around his half-brother, whispering revenge.

Warriors - Omen of the Stars

In "Omen of the Stars" he trains an apprentice called Ivypaw to destroy the Clans. She turns into a spy and fights for the Clans in the Great Battle. When he kills Hollyleaf, he is taken back to camp by Brambleclaw. Ivypaw, by then Ivypool, tries to kill Hawkfrost but when he overpowers her, Brambleclaw steps in and kills him himself. Hawkfrost then fades away forever.

Hawkfrost possesses an overwhelming desire to belong, as he considers himself an outsider in his Clan due to his half-Clan heritage. In turn, he craves the respect and acceptance of his Clanmates. However, he is also extremely ambitious and power-hungry, desiring to be deputy and then leader of RiverClan, and greatly enjoys ordering other cats around. He is also extremely clever, sly and persuasive, as he is very good at manipulating others to do his bidding and enjoys it.

After Tigerstar offers him a way to earn power, Hawkfrost finds himself immersed in his father's evil plans, and obeys his orders usually without question. Unlike Mothwing, Hawkfrost genuinely admires and respects their father and his power-hungry, bloodthirsty ways.

Much like his father, Hawkfrost is an arrogant and somewhat delusional hypocrite, as he often criticizes those who break the warrior code, but is perfectly willing to break it himself if it suits his own personal interests. He also hates being judged for his heritage, but at one point outright judges another cat, Brook, for her heritage. He also frequently claims that what he does is for the good of his Clan, when in actuality it's only for the sake of his own personal ambitions. 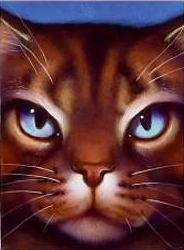 Hawkfrost on the original cover of Sunset 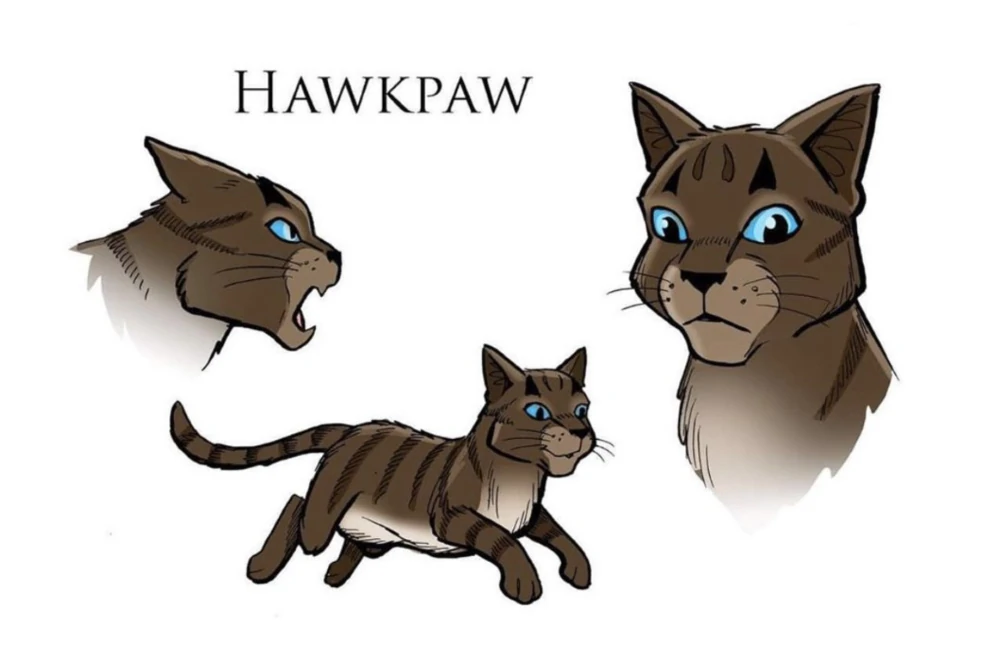 Hawk, Moth, and Tadpole on the cover of Return to the Clans

Hawkfrost on the Warriors Wiki