Enjoying the simple things in life.

Hazel is a minor antagonist in The Umbrella Academy, and a major antagonist turned anti-hero in it's Netflix adaptation. A time-travelling assassin, he teams up with Cha-Cha to stop the apocalypse.

In the Netflix adaptation, he is portrayed by Cameron Britton.

Partnered with Cha-Cha, Hazel's job is to keep the timeline safe by stopping things that shouldn't happen from happening. He wears a pink dog mask for his killings, and enjoys eating sweets. Both of them however are killed by Klaus when he was kidnapped by them, possessing one of them to shoot the other, before killing the possessed flunky by turning the gun on him.

In the TV show, Hazel first starts off as assassin, working with Cha-Cha. However, he sees the job of killing as just another boring job, and would rather do more simple things. As the season goes on, he dreams more and more of a simple life, and falls in love with the peaceful and kind Agnes Rofa, a worker at his often visited donut shop. In the end, he saves her from the clutches from Cha-Cha and The Handler, and the two live happily ever after, barring the fact they are soon vaporized by the meteor Vanya Hargreeves drops on his head.

As a hitman, Hazel is skilled in the art of marksmanship and hand-to-hand combat. He also seems to have some superhuman qualities, being able to go toe-to-toe with Luther and brushing off a hit from one of Diego's knifes. 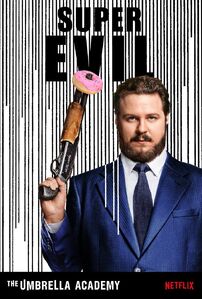 Retrieved from "https://villains.fandom.com/wiki/Hazel?oldid=3894860"
Community content is available under CC-BY-SA unless otherwise noted.