Assist Salem in her villainous plans.

Persuade Sienna Khan to ally with Salem (failed, due to Adam's coup).
Get revenge on Ozpin for his role in Gretchen's death.

Hazel Rainart is a member of Salem's Faction and a major antagonist in the American web cartoon series RWBY. As of Volume 5, he also serves as Oscar Pine's archenemy due to being the host body for Ozpin.

He is voiced by William Orendorff, who also provides the vocal sound effects of the Grimm.

Hazel is a tall and muscular middle-aged man. He is also unusually large and broad, as he is shown to tower over Adam Taurus who stands 6'4". He has short brown hair, a beard and hazel eyes.

He wears a two-tone olive green coat over a black 3/4 sleeve shirt, and a large belt. His pants are black and his boots are brown with white fronts. His hairy arms appear to have some scars near the edges of his sleeves.

Not much is known about Hazel's past except that he had a sister named Gretchen who desired to become a Huntress under Ozpin's guidance. However, Gretchen died during training, and Hazel holds Ozpin responsible for her death. At some point after this (and most likely because of it), Hazel became part of Salem's faction.

In "The Next Step", Hazel attends a meeting at Salem's Domain with fellow associates Watts, Cinder and Tyrian. He questions how Cinder was able to lose against a "novice" like Ruby Rose, stating that they've dealt with silver-eyed warriors in the past. Salem later instructs Hazel to meet with the White Fang leader, Sienna Khan, and ensure that they fall in line, to which he complies.

In "Kuroyuri", Hazel is seen in Mistral walking past a train station until he notices Oscar failing to get a train ticket from the machine. He helps Oscar by slamming on the machine with his hand, causing it to malfunction and shoot out a ticket for him. Hazel then tells the child not to let something as small as that hold him back before leaving.

In "Dread in the Air", Hazel appears before Sienna Khan during her meeting with Adam Taurus, standing his ground against her threats and prepared to convince her to cooperate with Salem. However, to his surprise, Adam commits a coup and murders Khan to usurp her position as High Leader of the White Fang. Hazel confronts Adam about his actions, angered that he withheld his plans from him and acted without his approval. Adam justifies his actions as it removes Salem's concern about Khan's willingness to cooperate. Hazel then states that no one needed to die, before leaving the meeting, to which Adam disagrees.

In "The More the Merrier", Hazel enters the meeting room to join Cinder, Emerald, Mercury, Raven and Vernal in their confrontation with Qrow, Team RNJR, Oscar, Weiss and Yang; closing the door behind him and revealing that the White Fang is beginning their assault on Haven and planting explosive charges across the school grounds. While everyone begins fighting, Hazel is confronted by Ren and Nora. Hazel tells the two he does not wish to fight them, but upon hearing their refusal to back down, accepts their challenge and engages them in battle.

In "Vault of the Spring Maiden", Hazel next seen berating Lionheart over being humiliated by Oscar. Though once he learns the boy is actually Ozpin, he drops Lionheart and completely loses his composure, recognizing the cane in Oscar's hand. Vowing to kill him repeatedly, Hazel jabs two shards of Lightning Dust into his arms and attacks, intent on avenging his sister who he proclaims was killed by Ozpin. Though Oscar tries reasoning with him, Hazel refuses to yield, but soon finds himself on the defensive when Ozpin takes over. Qrow Branwen tries to intervene, but Hazel sends him flying with an lightning-enhanced punch.

In "Downfall", Hazel easily defeats Ren, Qrow, and Oscar before Nora charges at him. Hazel angrily asks Ozpin how many more children have to die for him, electrocuting Nora without realizing it was actually enhancing her strength. Nora throws Hazel off of her, and Ozpin (through Oscar) reveals his Semblance is the ability to take great physical pain, hence why he is able to inject himself with so much Dust. When Hazel charges at her again, she uses Magnhild to send him flying outside the building where Adam and the White Fang are. He injects himself with even more Dust before witnessing Blake, Ilia, and Sun Wukong arrive with Faunus from Menagerie to stop the White Fang. When Adam asks Hazel what to do, he tells him it's Adam's own business and to figure it out for himself, contrasting what Adam said to him when he assassinated Sienna Khan. Hazel is impaled by a Lancer summoned by Weiss and dragged back into the building.

In "Haven's Fate", Hazel destroys Weiss' Lancer with a fire and lightning projectile. But then he is drop-kicked by Blake, and he later roars in rage after Lionheart flees the battle. Hazel then fights with Mercury Black and Emerald Sustrai against Ruby, Weiss and Blake, but they are eventually worn out and on the losing side. When Yang Xiao Long emerges from the vault with the Relic of Knowledge in hand, Hazel growls in anger, realizing Cinder has failed and they have truly lost. After Emerald breaks down and unleashes a powerful hallucination on the heroes, Hazel and Mercury make their escape down a mountain path, the former carrying the unconscious Emerald.

In “So That’s How It Is”, Hazel, Emerald, and Mercury return to Salem’s palace empty-handed, they briefly encounter Tyrian by the front entrance. Hazel leads the two inside of the palace. Inside the council chamber, the three are seen kneeling down. Salem inquires about why they failed their mission and Hazel tries to take the blame. This only invokes Salem’s wrath, causing her to bind Hazel to the floor with disembodied Grimm hands. After Salem releases Hazel, he speaks up about how Ozpin is leading Qrow and the children to Atlas. Hearing this infuriates Salem, Hazel along with the rest are dismissed, right before she unleashes her rage.

In "Our Way", Hazel looks on as Salem creates hybrid Beringels with wings on their backs, telling Mercury and Emerald that she is taking matters into her own hands.

In “Divide”, Hazel with Emerald and Mercury make their way to Salem. After climbing the steps to the immortal queen’s throne room, they notice Cinder has returned. Emerald delightfully runs towards Cinder while Mercury and Hazel stoically stand aside. After scolding Cinder by telling her to know her place, Hazel along with the rest of the subordinates are dismissed by their master.

In “Fault”, after trying to get Oscar to tell her the password to the Lamp of Knowledge, Hazel walks into the room, where he brutally beats Oscar. Telling him that was for Haven Academy, and the rest that follows will be for his sister.

Hazel appears as a Legendary unit in RWBY: Amity Arena. He is a powerful melee unit that, when deployed, locks onto a single target at a time and relentlessly attacks until one of them is defeated.

Hazel has a calm composure compared to the rest of Salem's associates. He is reserved and rarely speaks unless there's something important or he's given an assignment from Salem. He has a low tolerance or acceptance of failure, and does not let minor obstacles get in his way or stand by convention when there is a goal to be accomplished. Hazel is shown to have a sense of respect, being courteous and polite when speaking to Sienna Khan. However, he is not intimidated by Khan's threats, meaning that he has a distinct level of self-confidence.

Unlike the rest of Salem's associates, Hazel does not show cruelty nor resorts to violence to get what he wants, insisting to Sienna Khan that he doesn't aim to cause trouble and no one needs to die. His reaction to Khan's murder is a saddened look and verbal condemnation to Adam for his lack of communication about his plans and the needlessness of Khan's death. Showing that, despite his allegiance to Salem, he is a man with morals and empathy who takes no pleasure in pointless slaughter.

However, this changes when he encounters Ozpin. When he does, Hazel becomes filled with rage and killing intent, vowing to kill every reincarnation of Ozpin for the death of his sister, Gretchen. He holds no remorse in attempting to murder Oscar, stating that his blood wouldn't be on his hands, but rather on Ozpin's for choosing the child as his host. This shows that in spite of his typical reluctance to fight that he is quite capable of vengeance and terrifying bouts of rage.  Also as revealed in "The More the Merrier" Hazel murdered several huntsmen from Mistral under Salem's orders, indicating that he has no problems with killing if it hurts Ozpin in any way. He also attempted to brutally torture Nora with electricity for standing between him and Ozpin in "Downfall", showing how violent Hazel can become when blinded by his grudge against Ozpin.

Hazel is an incredibly strong fighter who prefers to fight with his bare hands. He is shown to have no issue dealing with multiple opponents, as seen when he is able to block attacks from Nora's Magnhild while simultaneously contending with Ren.

Hazel's Semblance makes him completely immune to pain, allowing him to take powerful hits from opponents and get back up with no discernible effort. Because of this ability, whenever Hazel deems the situation appropriate, he is able to inject himself with raw Dust crystals. Once he injects himself, the veins in Hazel's arms glow, his eyes shine, his voice becomes distorted, and he is able to discharge the elements of the Dust crystals from his entire body to enhance his attacks. Despite Hazel's massive frame and staggering physical might, he is quite agile in combat, able to move quickly and precisely without any noticeable effort, as well as land multiple solid hits on even a remarkably fast opponent like Qrow Branwen.

He is also able to cause a machine to dispense a train ticket by pounding it with his bare arm, leaving a dent. 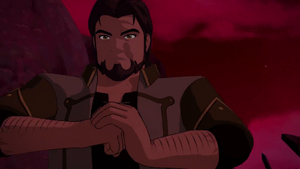 Hazel in the Volume 4 Opening 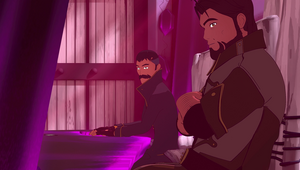 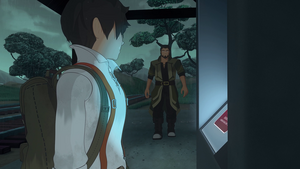 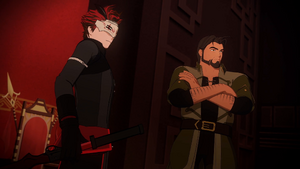 Hazel and Adam in the Volume 5 Opening. 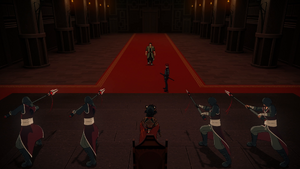 Hazel attends the meeting between Adam Taurus and Sienna Khan. 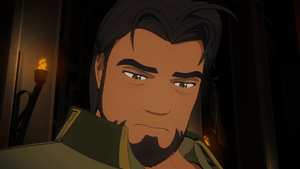 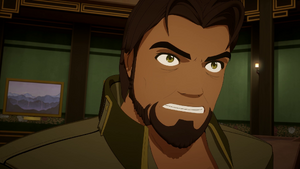 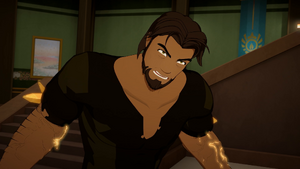 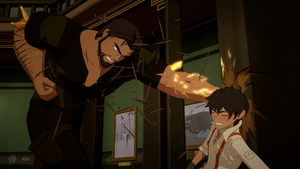 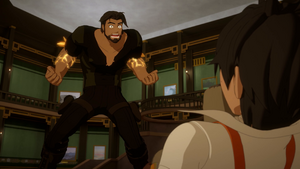 "Hiding behind the face of a child? A monster like you must be stopped!!" 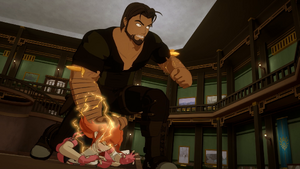 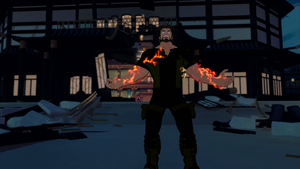 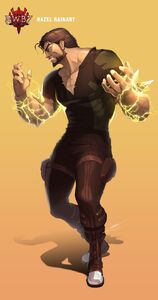 Hazel as he appears in RWBY: Amity Arena. 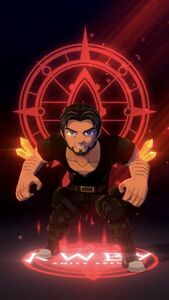 Hazel Rainart card during the 2020 April Fool's event.
Add a photo to this gallery

Retrieved from "https://villains.fandom.com/wiki/Hazel_Rainart?oldid=4138075"
Community content is available under CC-BY-SA unless otherwise noted.