Villains Wiki
Register
Don't have an account?
Sign In
Advertisement
in: Game Bosses, Cheater, Evil Vs. Evil,
and 22 more

Scientist
Supervillain
Member of the Imperfects

Find a cure for his mutation (ongoing).

He is a former U.S. Defense Science Board researcher who later became a molecule-controlling mutant after he was exposed to both a lethal virus and merged with alien technology.

Dr. Keith was once a quiet scientist who worked for the U.S. Defense Science Board and close on finding a cure for one of the world's deadliest viruses, The Legacy Virus. One day, while he was working on a cure, terrorists attacked his lab and a bomb was set off. Kilham reacted quickly and several agents were trying to contain the main research facility, risking the entire staff and community. Kilham injected himself with the vaccines, despite they hadn't been tested yet, he quickly rushes to the lab to ensure the deadly virus would not release from the facility, hoping that his vaccines would protect him.

The staff was later quarantined for a month. Days later, Kilham was in a fragile state and alive, but his body tissue was breaking down and mutated into a dangerous state. HIs state caught the eye of Niles Van Roekel, who kidnapped and brought him to his secret research center. Roekel was fascinated with Kilham's unstable DNA and wondered it would allow humanity to accept alien grafts.

Later, Roekel devised a way to control Kilham's degenerative process and harness his power, giving him an alien upgrade in which turned him into Hazmat and joined the Imperfects for the invasion of Earth.

During the invasion, Hazmat bumps into Venom, who stole some of Roekel's alien-tech and thought to some more from Hazmat. Venom was later defeated by Hazmat. Later, Hazmat fights Spider-Man at the Brooklyn Bridge but lost.

At the end of the invasion, he and the other Imperfects are sent to capture a super-being named Paragon. At the Grand Central Station, Hazmat is confronted by Magneto, who also seeks Paragon. At the beginning of the battle, Hazmat blinds Magneto, but still loses. The whereabouts of Hazmat remains unknown. 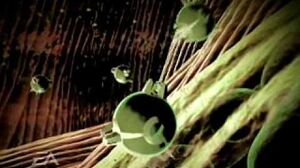