Challenge He-Who-Made-Light in a game of Liubo.

Get free from his prison and destroy all light (ongoing).

He-Who-Made-Dark is a recurring antagonist in the universe of the SCP Foundation. He is an ancient deity who created the darkness and the brother and archenemy of He-Who-Made-Light. Near the beginning of creation the two brothers fought each other, leading to He-Who-Made-Dark being sealed by his brother inside a meteorite, designated SCP-435-1, although his "shadow" SCP-435-2 was left free but still connected to the rock.

However, as years passed the meteorite eventually fell to prehistoric Earth, fracturing the continents apart and killing the first people who lived in the sea. The meteorite itself was left partially fractured as some of its pieces would become SCP-286, SCP-719-1, and SCP-1806. Because the Earth went through a day and night cycle, He-Who-Made-Dark would attempt to escape from the meteorite during the night as light was absent, each night making more and more progress and causing massive destruction, until the personification of Earth took notice of him and created the second people to keep He-Who-Made-Dark trapped within the rock by lighting numerous torches around it.

This went on for countless years until around 1950 when the US Army Corps of Engineers began evacuating several indigenous tribes from islands that were to be used as testing site. However, after the government forcefully removed the tribe who had in their possession the meteorite, the torches burn out, allowing He-Who-Made-Dark's shadow to cause massive destruction similar to nuclear explosions which was apparently covered up as part of the Castle Bravo Nuclear Test. Seeing that this was caused due to the meteorite being left in darkness, the US troopers restored the light over the meteorite. The SCP Foundation soon became involved and took the meteorite under their custody, forming proper containment procedures to keep He-Who-Made-Dark trapped. The Foundation thought of using another SCP to transport SCP-435-1 to an alternate universe, but deduced that this would cause the entity to be freed as he wouldn't be transported along with the meteorite.

When the Foundation discovered SCP-286, game board of Liubo carved from the same material as SCP-435-1, they had several test subjects interact with it, allowing the two brothers to possess them and play against each other while conversing in multiple languages. However, one day He-Who-Made-Dark took possession of Dr. L██ W███ who had been assigned to SCP-286, causing He-Who-Made-Light to take possession of Dr. S███ S████, who had been recently assigned to SCP-435-1, in order to play a game. This was stopped by the intervention of a security team which prevented He-Who-Made-Light from reaching SCP-286, resulting in He-Who-Made-Dark automatically winning and releasing the doctor. Because he won, SCP-435-1 began moving erratically, causing it to impact the ocean basin and leave destruction behind. The Foundation tried to intervene but stopped after SCP-435-1 ceased movement after three minutes.

The Foundation eventually discovered SCP-1806, a sculpture of an elongated human head which caused several anomalous effects to people whose shadows crossed the sculpture's shadow. This effects included: making the person's shadow much dark then it should naturally be before changing shape and becoming inconsistent with the person's outline; following this the affected person would lose their senses becoming partially blind but also gaining the ability to see through other shadows or dark areas He-Who-Made-Dark and other entities residing with him; the person would eventually lose all senses, talking seemingly gibberish and become unable to sustain themselves any longer, leaving them to die if one is present to help them. This had happened to Foundation employee Dr. T. Ellison who was able to see He-Who-Made-Dark and his powers.

Given that He-Who-Made-Dark is the embodiment and creator of darkness, he had dominion over every form of darkness which included shadows. He could manipulate the darkness to whatever he saw fit, being capable of molding as it was a physical matter or energy. However, because of this He-Who-Made-Dark's greatest weakness was light, especially that emitted from his brother He-Who-Made-Light who was able to seal his brother inside a meteorite which would keep trapped as long as light shone on it, but if the meteorite remained in darkness for more than 90 minutes then He-Who-Made-Dark would be completely freed.

This sealing seemed to have also caused He-Who-Made-Dark to be fragmented into some pieces, as SCP-435-2 was described as his shadow. Although being a mere shadow, SCP-435-2 was extremely powerful on its own as it could move away the matter touching it and was able to manipulate Cherenkov radiation because SCP-435-2 couldn't be seen in through normal eyesight due to only being visible in darkness. However, SCP-435-2 was still bound to SCP-435-1 and could not move too far away from it, nor could do much damage as long as light shone over the meteorite.

Both He-Who-Made-Dark and his brother were capable of possessing any high order mammal, including human beings, when the latter two came into contact with SCP-286 and becoming SCP-286-1 and SCP-286-2, with He-Who-Made-Dark possessing SCP-286-2 and if only one mammal touched SCP-286 then one of the brothers would manifest the creature's opponent to possess. If one of the brothers one the game then a catastrophe related to the winner would occur somewhere in the world. Through SCP-1806, people could see through shadows and dark places, which were described as portals, the domain of He-Who-Made-Dark where he and his legion resided and where anything related to light was destroyed. There people would lose all senses related to light and feel the presence of He-Who-Made-Dark's living creatures before losing themselves entirely.

The true appearance of He-Who-Made-Dark is largely unknown. His shadow, SCP-435-2 when seen through computer-enhanced imagery in various spectra was described as a complex structure with a three-fold symmetry along the longitudinal axis from which extended long tube-like structures that resembled cephalopods of the order Teuthida. These structures, despite being stationary show undulating movements and doesn't appear to have mass or inertia, and is only visible when in absence of light.

Not much is known about He-Who-Made-Dark's personality, but from gathered information it can be deduced that the entity is malevolent as he wished to destroy everything, including humanity with the entity not caring about their existence at all, and bring eternal darkness into reality. He also appears to have a deep hatred towards his brother He-Who-Made-Light as He-Who-Made-Dark started his quest to annihilate everything after his brother made fun of his creation. While possessing SCP-286-2, He-Who-Made-Dark would appear sluggish, halting and with slow movement, speaking in a low-pitched and throaty manner, often speaking monosyllabic words. 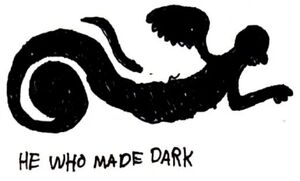 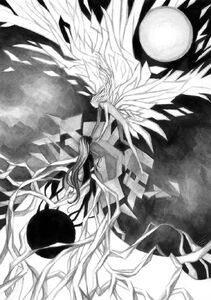 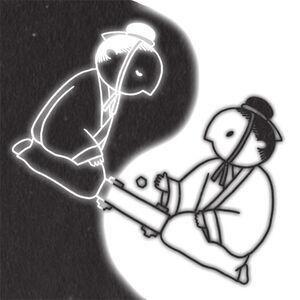 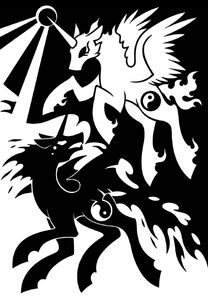 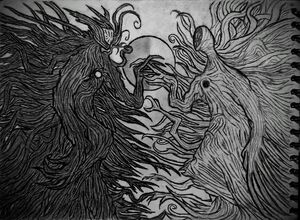