The manager of Pixies inc

He is voiced by Ben Stein of Ben Stein's Money fame.

Head Pixie is the boss of Pixies Inc. and the de facto leader of the Pixie race. His assistant is Sanderson and together, they always try (and fail) to make the Earth a dull and boring place. Ironically, he is also a rapper.

Head Pixie, like all Pixies, wears a grey business suits and pointy hat. (So far, only his doubles as a pen.) However, H.P. appears older than most Pixies, a satire of the cliche businessman since he is in charge of all Pixies in Pixie World.

He has a very dry sense of humor, and laughs in a very lone and dry boring monotone voice, even when he gasps in shock or screams. Like all Pixies, he treats magic as a business and always uses his magic as a way to make a profit and gain what he wants.

In almost all of his appearances, he's always tried to take over Fairy World ever since they managed to buy it out in Pixies Inc. until Timmy won the gold game for a wish. Since then, he committed plans through contracts and plans that took over 37 years to try and accomplish his goal, and to this end, no avail.

Schools Out: The Musical

He and Sanderson are the main antagonists of "Schools Out: The Musical", where it is revealed that had planned for over three decades a way to make Earth boring and cut the fairies off from their godchildren, using Flappy Bob and his Learn-a-Torium to accomplish this. Timmy was able to sway Flappy Bob to his side, and the Pixies' plan failed. H.P vowed to Timmy of their next 37 years plan will not fail when Timmy is 47.

H.P. and Anti-Cosmo are the main antagonists of Fairly Odd Baby, where they planned to capture the first Fairy baby born in thousands of years, Poof, and use his uncontrolled magic to take out the other magical races. 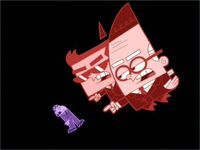 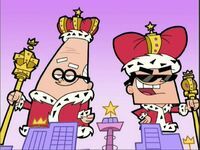 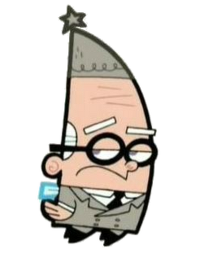 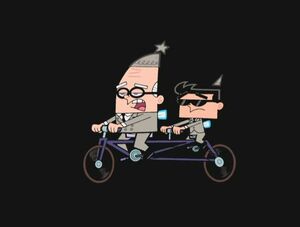 Head Pixie and Sanderson's defeat in Schools Out: The Musical.
Add a photo to this gallery

Retrieved from "https://villains.fandom.com/wiki/Head_Pixie?oldid=4160009"
Community content is available under CC-BY-SA unless otherwise noted.