Chopping off his enemies' heads (formerly).

Tending to his horse Daredevil.

Chop off as many heads as possible (formerly).

Recover his own head (succeeded).

The Headless Horseman is the central antagonist of the 1999 horror movie Sleepy Hollow, an adaptation of the late Washington Irving's 1820 gothic story The Legend of Sleepy Hollow.

He is the ghost of a merciless Hessian mercenary who was known for his love of carnage and chopping off heads. Following his death during the American Revolutionary War, the Hessian is brought back from the dead by Lady Van Tassel, who controls him to accomplish her own plans of revenge.

He was portrayed by Christopher Walken, who also played Max Zorin in A View to a Kill, Bradford Whitewood Sr. in At Close Range, Frank White in King of New York, Max Shreck in Batman Returns, Vincenzo Coccotti in True Romance, Gabriel in The Prophecy series, Colonel Cutter in Antz, Mr. Smith in Nick of Time, Reed Thimple in The Country Bears, Salvatore Maggio in Kangaroo Jack, Cornelius Hatcher in The Rundown and King Louie in the 2016 The Jungle Book live-action remake. His stunts were performed by the martial artist Ray Park, who also played Darth Maul in the Star Wars franchise and Toad in X-Men.

In life, the horseman was a Hessian mercenary, summoned by King George III to fight in the American Revolutionary War. However, unlike his companions who came in for money, the Hessian came for his love of carnage and spent his years riding into battle with his horse Daredevil, chopping off the heads of American soldiers. It wasn't until the winter of 1779 that he finally met his end.

A troop of Continental soldiers ambushed the Hessian in the Western Woods, first shooting down Daredevil (much to the Hessian's distraught). He fled into the trees and stumbled upon two little girls gathering firewood. The Hessian calmly tells the girls to be quiet, but one of them (Mary Archer) gives him away by snapping a stick, alerting the enemy soldiers to his location. Though the horseman sold his life dearly, killing several of his pursuers, he was eventually overwhelmed and decapitated with his own sword.

After witnessing the Hessian' death and burial by the soldiers, the young Mary sells her soul to the Devil so that she would raise the headless Hessian from the dead and use him to get revenge on the Van Garrett and Van Tassel families for driving her family out from their rightful home in Sleepy Hollow. During the start of the film, he is seen being risen from the grave, but now headless, as he goes around chopping off heads of people in Sleepy Hollow.

Upon his arrival, New York police constable Ichabod Crane (the protagonist of the film) soon learns that the Horseman's skull was stolen from his grave and is used to control him in committing the murders. He also learned that all of the victims (except for Brom Van Brunt, who was only killed by the Horseman in self-defense, since he wasn't chosen to be a victim) had special ties to the Van Tassel family and that the argument was over the land rights and fortune that the Van Tassel family have inherited.

At first, Ichabod believes Baltus Van Tassel was the one behind it since the latter inherited the fortune following the Van Garretts' death, but it wasn't when Baltus was killed by the Horseman following the deaths of Dr. Lancaster and Reverend Steenwyck. The next morning, Ichabod suddenly realizes that Baltus' second wife Lady Van Tassel (who was actually a grown Mary Archer) was the one who was controlling the Horseman into committing the murders, as she grew envious of the Van Garrett family and the citizens of Sleepy Hollow for driving her out into the Western Woods as a child following her parents' deaths.

Near the climax, Lady Van Tassel summons the Horseman again to murder her stepdaughter Katrina so that she can secure the entire fortune to herself, but Ichabod defeats her (with the help from young Masbath, whose father was a victim of the Horseman) and returns the skull back to the Horseman. After the head is restored back to its original form, the Horseman is now free from Lady Van Tassel's control, and he decides to spare Ichabod, Katrina, and Masbath. After reuniting with Daredevil, the Horseman spots the unconscious Lady Van Tassel, recognizing her as the little girl who betrayed him to his death years ago and the one responsible for making him commit the murders. Without hesitation, the Horseman angrily grabs Lady Van Tassel and gives her a bloody kiss, and he and Daredevil gallop themselves back to Hell with a screaming Lady Van Tassel in tow, hoping to make her pay for her crimes and fulfill her side of the deal with the Devil. 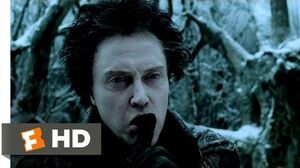 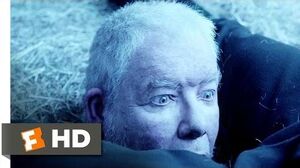 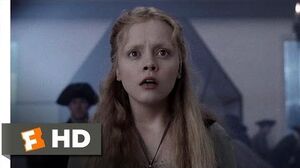 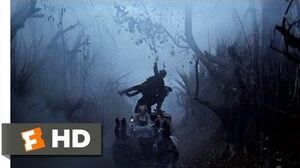 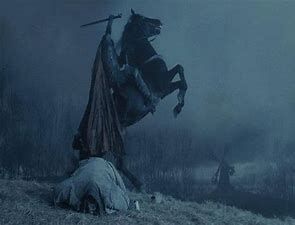