The Headless Man
The Ghost

The Adventures of Ichabod and Mr. Toad

Obtain a new head by killing Ichabod Crane (unknown if he succeeded or failed).

The Headless Horseman is the main antagonist of Disney's The Legend of Sleepy Hollow (which is based on the 1820 short story of the same name by the late Washington Irving); the second half of Disney's 11th full-length animated feature film The Adventures of Ichabod and Mr. Toad.

He was voiced by the late Billy Bletcher.

Brom Bones tells Ichabod Crane the story of the Headless Horseman, who was beheaded during the Revolutionary War. Every Halloween night he rides in Sleepy Hollow looking for a new head. The best way to escape him is to cross the bridge, as the Horseman's dark powers are limited only to the woods.

That very night Ichabod rides home alone and keeps imagining that he is being followed. When he finds that it is only cattails bumping on a log, Ichabod and his horse hysterically laugh but suddenly stop as another sinister laugh joins them. They both slowly turn around to find the Headless Horseman about to attack them.

He gives chase, laughing all the while. When Ichabod momentarily is trapped on the Horseman's own black steed, he looks down the Horseman's neck to find nothing but evil hollow laughter. Ichabod runs for the bridge and barely manages to make it across. As Ichabod turns around, he screams as the the black horse rears up and the Headless Horseman throws his head (a Jack o'Lantern set on fire) right at him.

The very next morning Ichabod's hat was found next to a shattered pumpkin, but Ichabod had vanished. Rumors about Ichabod still alive and married to a wealthy widow in a distant county are dismissed, as the good townsfolk of Sleepy Hollow know that he must have been spirited away by the Headless Horseman himself.

The Headless Horseman appears in the House of Mouse as a recurring guest in the audience.

The Revenge of the Headless Horseman

The Headless Horseman appeared as the main antagonist in the now-defunct attraction of the same name at Hong Kong Disneyland. When a traveling circus claims that they have found the Horseman's head and are displaying it, the Horseman returns to slaughter and behead them all and reclaim what is his.

The Headless Horseman makes a cameo in the special The Scariest Story Ever: A Mickey Mouse Halloween Spooktacular where while trick or treating Goofy sees him take the place of a statue and give his iconic laugh much to his horror. 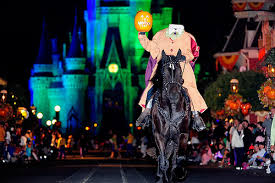 Headless Horseman in the Disney Parks. 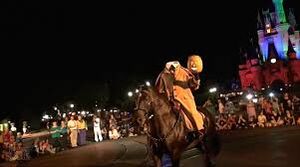 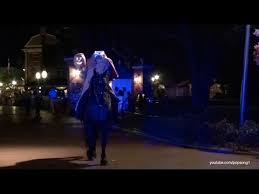 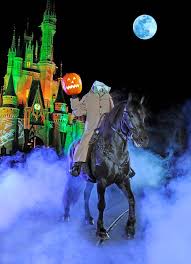 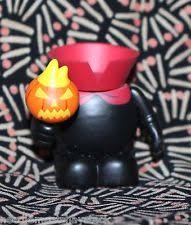 Headless Horseman Disney Vinylamtion.
Add a photo to this gallery 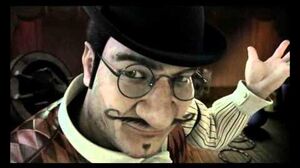 Hong Kong Disneyland Halloween 2011
Add a photo to this gallery