The Last Generation (a Chick Tract)

The Healers were the main antagonists in the Chick Tract "The Last Generation".

The Healers were a part of a single world government that tried to convert the world's inhabitants to their worship of the deity Mother Goddess. The Healers were set up as a means as attempting to convert anyone to their ideology, and if they refused, they were either executed on spot, or they were taken to be "fixed" at mental camps. Their leader was most likely the New Age Healer that was seen on the front of the tract.

The New Age Healer then went to the local school and convinced Bobby, one of the students, that if he turned in anyone who did not follow their religion, to report on them. If he did, he would get a huge reward. Bobby then betrayed his grandfather and turned him into the Healers, and he is experimented on and later disposed of when they failed to break him. Bobby's parents soon left home, and were taken away into Heaven.

Considering Bobby is mentioned at the end of the tract to have been gone to Hell and how things work in the Jack Chick universe, this movement would most likely inevitably fall. 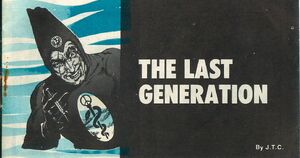 Retrieved from "https://villains.fandom.com/wiki/Healers?oldid=3260714"
Community content is available under CC-BY-SA unless otherwise noted.