Leader and founder of the Core Area Warriors

Hearts is the main antagonist in the Universal Conflict Saga from the Super Dragon Ball Heroes series. He is the leader and founder of the Core Area Warriors who wants to destroy Zen-Oh, overthrow the Gods and conquer the multiverse.

He was voiced by Takehito Koyasu.

Hearts has humanoid build, blonde-hair and pointed ears. He has white skin, wears a black coat, red gloves, and has an orange visualizer.

Like Zamasu, Hearts is a very self-righteous and arrogant individual, with a self-serving and all-consuming goal. He believes that the multiverse can only truly be free once the Omni-Kings are killed. At the same time, he is somewhat of a massive hypocrite: While talking about true freedom and peace, he has no qualms about attacking planets and killing countless people, seeing it as all for the sake of being "nourishment" for the multiverse. When called out on his hypocrisy, not only does Hearts admit this fact, but actually seems to welcome it, accepting his hypocrisy with grace.

Hearts appears to have a composed attitude, as he is not unsettled by Vegeta and Trunks's unexpected appearances, and keeping his plan as his main priority first and foremost. His confidence was seen as how Hearts willingly questioned Hit about the identity of the strongest mortal throughout the multiverse, and showed zero hesitation or doubts about facing off against Jiren upon learning his identity.

In addition to his arrogance, he stated that he wants to draw out Goku's perfected Ultra Instinct ability.

Hearts along with the other members of the Core Area Warriors who make they're first appearance after the chains surrounding the Prison Planet have broken and the planet is on the verge of destruction. After Zamasu retrieves Cumber's unconscious body, Hearts and the others teleport away.

Hearts appears along with Fused Zamasu and watches his allies, Oren and Kamin, battle against Vegeta and Future Trunks. Hearts tells Zamasu that they hadn't planned on dealing with those from Universe 7 until a later time and asks him to refrain from getting involved until after Zeno has been defeated. He then travels to Universe 6 along with Zamasu and unannounced to all on the battlefield, he attacks the Saiyans and Hit with a gravitational force that pins everyone to the ground. He tells Vegeta that he is the man that will take down Zeno and will use the Universe Seed to do so along with taking down the Gods of Destruction and the Supreme Kai.

Hearts pins everyone to the ground

In a display of power he creates a large transparent cube which he sends upwards into space and around a nearby planet before shrinking the cube to destroy it. He then creates additional cubes and places them above the Saiyans and Hit, ready to do the same to them but Oren and Kamin tell Hearts that they were in the middle of having fun fighting them causing Hearts to halt his attack. Hearts suggests heading towards the next Universe and asks Zamasu to come along with him though Zamasu tells Hearts not to order him around. Spotting Hit, Hearts asks him who is the strongest being in all of the Universes. Though Hit does not answer, Hearts is able to read his mind and determine that the answer is Jiren and decide to head to his Universe. Hearts looks down on Goku Hearts, having previously sent Cunber to try and deal with Jiren, notices his failure and increases the gravity on the Pride Trooper to stall him from attacking Cunber before teleporting the ancient Saiyan away to Universe 3. He then sends Oren, Kamin, and Fused Zamasu to attack, however, they fail to do any real damage. Later, Hearts makes note of Goku's arrival and wonders if he has become a true god after seeing his power. Hearts calls out to Lagss as he wishes to use her power and she soon appears surrounded by a barrier of pointed glass. Using his powers, Hearts sends the pointed end of the barrier towards Goku though he is able to destroy it thanks to his might in his Ultra Instinct -Sign- state.

Soon after Lagss battle with Goku and Trunks, Hearts tells her to move on to assist Cunber in Universe 3 as only she can do so. Hearts reads Goku's mind and notices that his previous Ultra Instinct -Sign- state was imperfected and vows to draw out it's real power. Goku charges at Hearts but using his Gravity Burst, he pins Goku, Trunks and Vegeta to the ground with ease. After Shin appears on the battlefield and Goku teleports everyone away, Hearts makes plans to head for their next destination now that they have gathered enough energy from Universe 11. Jiren attempts to stop him but Hearts traps him in an Energy Cube to immobilize him. Super Hearts Hearts and his allies head to Universe 7 where they confront the Z-Fighters once more. Goku targets Hearts and rushes at him but Hearts repeatedly slams him to the ground using his Gravity Burst technique. When the Universe Seed begins to shine, Hearts removes his jacket and powers himself up, entering into a stronger state before saying that the Universe Seed will soon be complete. 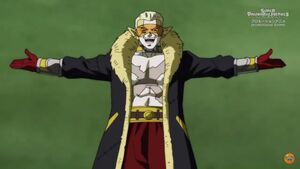 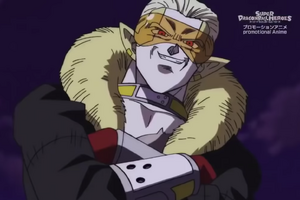 Hearts looking down on Goku 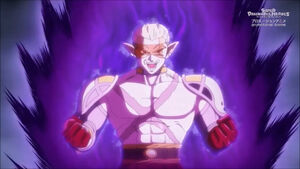 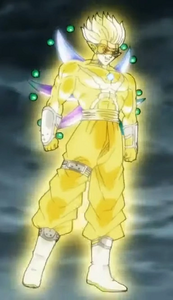 Hearts after becoming the Godslayer. 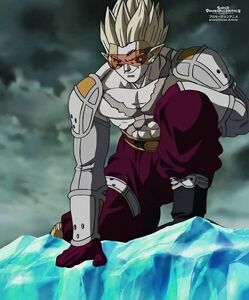 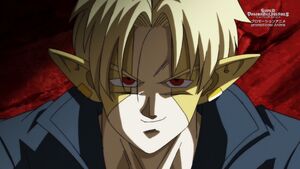