Mick Rory, better known as Heat Wave, is a supervillain from The Flash comics and media. He first appeared in The Flash #140. (November, 1963) and was created by John Broome and Carmine Infantino.

Even at a young age, Mick Rory was a thorough pyromaniac. He set his house on fire and burned his family alive. He attempted to get a job at the circus as a fire eater, but eventually, he wound up setting the circus on fire. He, later, set out on a life of crime and taking the name of Heat Wave.

Heat Wave has been known to make flamethrowers and "heat guns" to assist in his crimes.

He once became an avatar for the Sage Force and gained the ability to create fire demons.

Dominic Purcell plays Heat Wave in the 2014 TV series The Flash and the spin-off DC's Legends of Tomorrow, alongside his Prison Break co-star Wentworth Miller who plays Captain Cold in the series. Initially being a villain with little care for anyone but his partner, he has started to warm up to his team-mates onboard the Waverider as part of the LoT. 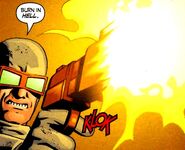 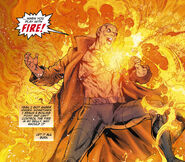 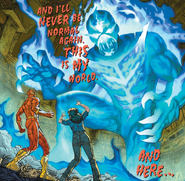 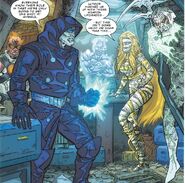 Retrieved from "https://villains.fandom.com/wiki/Heat_Wave?oldid=3702787"
Community content is available under CC-BY-SA unless otherwise noted.