Starve the Haida off their land by blocking the caribou's migrating path so he can mine for gold (failed).

He was portrayed by the late Geoffrey Lewis, who also portrayed The Skull in Monster Squad.

Ever since Leland Drury found a goldmine near a mountain called Devil's Thumb, Heath has been assisting in his plans to become rich and starve a local Haida tribe off their lands by blocking the caribou's migrating path, while also capturing and enslaving the native hunters who went to search for their lost caribou.

After a boy named Henry Casey was rescued by Lily Joseph of the Haida tribe and refused to help them find the caribou, he heads off to Dawson, where he spots Leland with his miners. Henry meets up with Heath at his store and explains his experience with the local Haidas. Henry also mentions the soldiers he saw earlier, but Heath brushes this off, stating that he only "saw somebody passing through".

Later, after Henry has a dream about finding the caribou, he decides to help the Haidas find the caribou and restore balance. Henry comes back to Heath's store and asks if he could buy some food for the starving villagers. Heath refuses, but Leland tells Heath to give Henry what he wants and he then introduces himself to Henry before leaving.

Later that night, Leland orders Heath to assassinate Henry to prevent him from discovering their plans and Heath heads out to do the job. The next morning, Heath arrives at Henry's camp and raises his gun to shoot Henry, but his mule blocks his path and Heath is forced to flee. Upon coming back to Leland's residence, Leland asks Heath if he finished the job, to which Heath replies that Henry is just a boy, but Leland angrily replies that Henry could ruin their plans.

Leland then comes up with one more plan to stop Henry and breaks into Heath's store to retrieve some bullets before telling Heath to get dressed and go to the village with him. After Leland unsuccessfully tries to con Henry into shipping gold and forbidding him to go to Devil's Thumb, he warns Heath that Henry is coming and orders him to get the miners ready.

When the time of the hunting came, Henry, White Fang and Peter head off into the forest with Lily following them. Along the way, they discover the corpses of the hunters who did not return, while dodging traps set up by the miners. After Peter is killed by one of the miners, Henry, Lily and White Fang manage to reach their destination and find the caribou.

When Henry and Lily discover the blockade that traps the caribou, they head off to get help, only to fall into a hole and discover the goldmine. They retrieve a stack of dynamite to free the caribou and notice the missing hunters being enslaved by Heath. As Leland is about to finish off one of the enslaved hunters, Henry pulls out his gun and threatens to shoot him if he proceeds. After Leland explains his motives to Henry and offers him a deal to mine with him, Henry refuses and shoots him in his arm. Leland orders his men to kill Henry and the two hunters flee. Henry manages to escape, but Lily stays behind and gets captured by the miners to give Henry time to escape. When Leland realizes that Henry is about to blow up the wall to free the caribou, he orders Heath to give him a captured Lily to distract Henry from blowing up the wall. Henry manages to set the dynamite and free the caribou, while Leland flees with Lily. Henry and White Fang then to rescue Lily, while Leland is trampled to death by the caribou.

It is unknown what happened to Heath afterwards, but is could be possible that Henry reported Heath and the other miners to the Mounties and that they were eventually arrested for their crimes, while the captured hunters were set free. 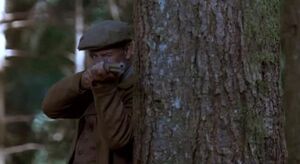