To be together with Cathy Earnshaw (succeeded after death).

To own both Wuthering Heights and Thrushcross Grange (succeeded).

Thrushcross Grange Heathcliff is the main antagonist of the second half of the 1847 novel Wuthering Heights by the late Emily Brontë. Many speculate that Heathcliff is a dark personification of the author herself. Heathcliff could be counted as the hero during the first half of the book, but after his lover Cathy dies he grows bitter and seeks revenge on Cathy's widower Edgar Linton and her daughter and namesake Catherine Linton.

He has been portrayed by several actors over the years, including:

Heathcliff was discovered as an orphan on the streets of Liverpool by Mr. Earnshaw. When Mr. Earnshaw brought the boy into his family, Heathcliff and and Earnshaw's daughter Catherine developed a deep bond. After the death of Mr. Earnshaw, his son Hindley, who despises his adoptive brother, becomes master and forces Heathcliff to become a servant. When Heathcliff and Cathy went to the Linton House to spy, Cathy was bit on the leg by a dog and forced to stay at their house where she developed a friendship with Edgar Linton and his sister Isabella. Cathy began to spend less and less time with Heathcliff, which angered him. Edgar soon proposed to Cathy, and she accepted.

When he returns three years later Cathy is happily married to Linton. Heathcliff lives with Hindley who is an alcoholic since the death of his wife and birth of his son. As Heathcliff and Cathy spend more and more time together, she discovers that Heathcliff is seducing Linton's sister Isabella, they elope and Heathcliff is banned from seeing Cathy again. It is here that Heathcliff shows his true colours as he beats poor Isabella. He manipulates Nelly to send a letter and arrange a meeting with Cathy who is pregnant. He distresses Cathy and she gives birth prematurely killing her. Struck with grief he begs Cathy to haunt him as a ghost. Isabella runs away from him in fear, asking her brother to send her to London where she gives birth to a son. Hindley then dies giving Heathcliff full control of Wuthering Heights.

When Isabella dies her son (Linton Heathcliff) is sent to live with his uncle Cathy's daughter and him get along until his father sends for him. Later on, when Catherine is 15 years old, she meets Heathcliff and by extension Linton, they begin to fall in love, Heathcliff wants them to marry but Catherine's Father disapproves. They are banned from seeing each other until Heathcliff kidnaps Catherine and Nelly and forces her to marry his son, making Linton heir to Thrushcross Grange. Edgar is on the verge of death and Catherine escapes to be with her father again. When he dies Heathcliff forces her and Nelly to be apart. He revels to Nelly that Heathcliff dug up Cathy's grave to look at her again he also revels that Cathy just as well did good on his request. Linton dies making Heathcliff owner of Thrushcross Grange. He rents it to a Mr. Lockwood who one night on a visit to Wuthering Heights is visited by the ghost of Cathy. Soon Heathcliff neglects to eat and one night is found dead. Catherine escapes with Hindley's son Hareton.

Heathcliff is described on many occasions as being a Roma, or Gypsy with dark eyes and hair. He dresses in rags at first but when he becomes rich he dresses as a gentleman. Heathcliff is also described as being broad shouldered and fierce. 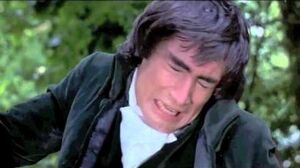