Spending time with her parents.

Find and turn people into the Flayed (succeeded).

Serve and aid the Mind Flayer in his goals (succeeded).

Heather Holloway is a supporting antagonist in the third season of Stranger Things. She is the daughter of Tom and Janet Halloway, and is a lifeguard at the Hawkins Community Pool, working alongside Billy Hargrove.

She was portrayed by Francesca Reale.

Heather Holloway is the daughter of Tom and Janet Holloway. Before the summer of 1985, Heather became a lifeguard at the Hawkins Community Pool where she became co-workers with Billy Hargrove.

In the summer of 1985, Heather began working as a lifeguard at the Hawkins Community Pool alongside Billy Hargrove. Her shift was always the one before Billy's.

During one of her shifts, she finds Billy acting strange and goes to check on him. This proves to be a bad idea as Billy abducts her and brings her to the Mind Flayer, where she is converted into one of the Flayed. Her conversions is also seen by Eleven when she is spying on Billy, but she does not see Heather or the Mind Flayer.

Eleven uses her powers to track down Heather after they figure out she's missing, and find her in a tub of ice, with Heather popping out, jump scaring Eleven and then falling through the floor in the Void.

When Max and Eleven go to Heather's house, they find Billy with her parents Tom Holloway and Janet Holloway. Heather comes out of the kitchen offering Eleven and Max a cookie, which they refuse and then leave. Janet later doesn't feel so good, spills her wine, and goes to lie down, only to fall to the floor unconscious because of Billy and Heather poisoning the drinks. When Tom goes to check on her, Heather picks up an empty bottle and knocks him out with it. They then (as seen in a flashback) drag them to the garage, restrain them, and take them to the Mind Flayer, where they are then converted into the Flayed.

She is next seen tending to Billy's injuries after his fight with Eleven, with Billy commenting on how Eleven, Max, Mike, Will, and Lucas know that he's Flayed. Heather responds that they don't know about the rest of us, with the shot panning out to show more members of the Flayed.

Later, the figures out that the Mind Flayer has control over more people (thus dubbing them as "Flayed]"), realizing that Heather is amongst those people.

Heather became a lifeguard at the Hawkins Community Pool in the summer of 1985, During one of her shifts, Eleven find her unconscious because of poisoning drinks. When Tom goes to check on her, Heather knocks him out. They then learn that Heather is one of the Flayed. 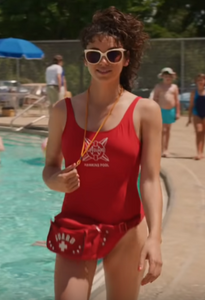 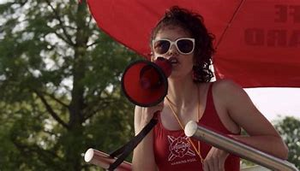 Heather working at her lifeguard shift. 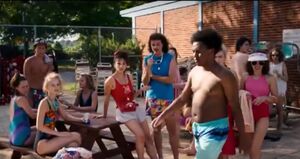 A Flayed Heather being activated.