Employer of Stand-User assassins
Ruler of his universe

Conquer every possible reality (both failed).

Heaven Ascension DIO, also referred to as The Noble One, is the main antagonist of JoJo's Bizarre Adventure: Eyes of Heaven. He is a version of Dio Brando in a universe where he won against the Joestars and became a god-like figure.

Heaven Ascension DIO's origins take place after the events of JoJo's Bizarre Adventure: Stardust Crusaders, which this timeline resulted in the Joestars and their allies being destroyed. After destroying his enemies, DIO obtained the souls from the 36 Sinners with assistance from Enrico Pucci, evolving into his current form. He then took over the world, rewriting humanity to worship him as a god.

Meanwhile, as Funny Valentine tried to escape the Infinite Spin by hopping through dimensions, he found the world where Heaven Ascension DIO lived. Removing his curse, the President told him about the Corpse Parts and the other timelines. DIO, wanting to conquer these timelines, soared across space and time to revive his allies and making new ones through brainwashing.

Having the Saint's Corpse's spine, DIO sent his minions to attack the Joestars collected the other corpse parts and defeated his brainwashed minions until warping them to his realm. Defeating even Gold Experience Requiem and Tusk ACT4, DIO stole all but one of the Corpse Parts in hopes of getting even more powerful, with the Joestars fleeing.

DIO then spread the Corpse Parts along his most trusted allies to help them defeat his enemies, only for him to discover Valentine's treacherous plans. When confronted, Valentine fought him throughout dimensions, but was eventually erased from existence. DIO talked to Pucci other his troubles, as the latter went to confront his enemies. After being beaten by Jotaro and Jolyne, Pucci killed himself to avoid telling the enemy his master's secrets.

When the Joestars obtained the Corpse Parts against, they went to Cairo where DIO planned to defeat them. Although DIO lost the fight, he rewrote time to heal himself. Although Jotaro discovered his powers, he banished their allies to other dimensions, giving him time to grow his power. However, this was a trap, as DIO used his power to destroy all of his enemies. Dio then fused the souls of the 36 Sinners and the Corpse Parts, with reality itself transforming into DIO's desire. Jotaro and Jolyne attempted to destroy DIO once more, but he killed the latter and tried to kill the former. Jotaro didn't die however, as Star Platinum is the same time of Stand as The World, his stand evolved into Star Platinum Over Heaven.

Jotaro and DIO began their fight once more. DIO tried to deliver one final attack, but his attacks hit his bracelets of the original timeline. The bracelets fused with DIO's own, exploding them and crippling DIO. DIO tried to use his blood to blind Jotaro, but Jotaro delivered one final punch, destroying him once and for all.

Due to this, a new, perfect timeline emerged. In this timeline, the storyline of JoJo's Bizarre Adventure: Eyes of Heaven never happened, and the Joestars and their allies never died. Thus, peace reigned throughout time.

Heaven Ascension DIO uses the Stand The World Over Heaven. The World Over Heaven has the ability to not only stop time, but rewrite reality itself. Using this, DIO can instantly heal himself, teleport, revive the dead, control minds, use electrokinetic attacks, and travel through dimensions. 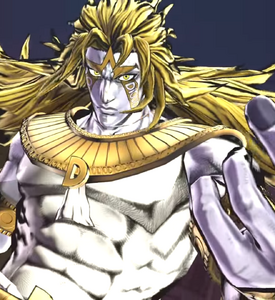 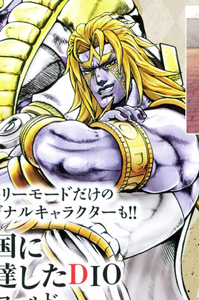 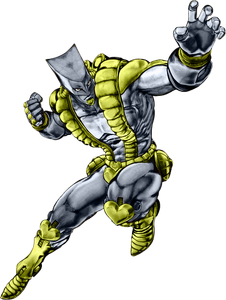 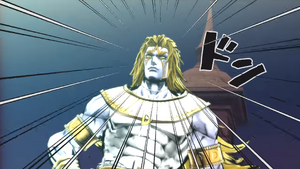 Heaven Ascension DIO revealing his newfound power to the Joestars. 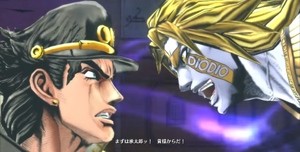 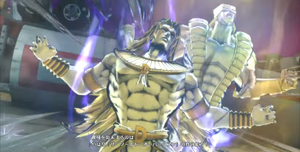 Heaven Ascension DIO taunting the Joestars with his ultimate Stand. 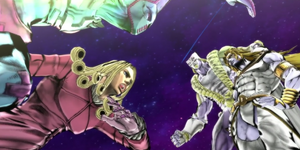 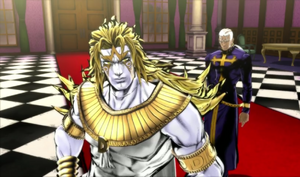 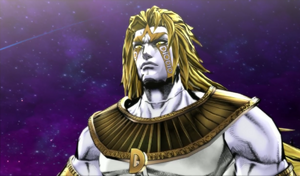 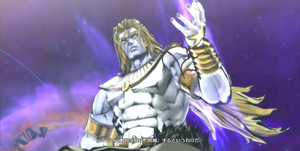 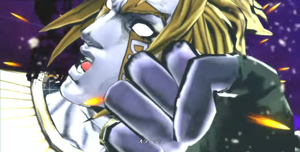 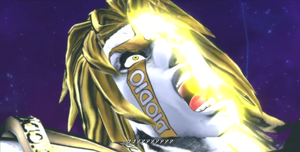