Make a lot of money doing so.
Increase their power in the process.

The Chinese invented organized crime and they continue to be the best when it comes to organized crime. Exhibit A, being the secretive and near-mythical "Heaven Thunder Triad". By the time the American Mafia was born, the Triads had already been around for 300 years (and two centuries before the Sicilian Mafia itself was founded). As for the Heaven Thunder Triad, they were already a secret society before the Manchus wiped out the Shaolin monastery in Fuzhou in the 17th century, which led to the creation of the Triads known to academics and law enforcement. No one knows how old the Heaven Thunder Triad actually is nor where was it founded.

It has over 50 branches around the world. These branches may have different names and their affiliation with the Heaven Thunder Triad is kept a secret. Hong Kong is the center of operations for the Triads which determines what the overall policy will be regarding the businesses and operations of the Triads, maintains the observance by the Triads of the rituals, and is in charge of preserving the image of the Triads.

It's an organization with over 10+ million members, who are in every industry and branch of the government. They infiltrate and misdirect, and only fight if they are unable to avoid a confrontation. Fewer than 5% of its members are involved in the production and sale of illegal drugs. Most members know martial arts, having been practicing since they were 3 or 4 years old. Some of the toughest killers on the streets are Triad soldiers. They also have their own Novas (superhumans) as enforcers, assassins, and security.

It's involved in a wide variety of illicit markets, including; arms trafficking, illegal gambling, prostitution, counterfeit goods, loansharking, and so on. They also control businesses and have made investments in the legal markets, such as in real estate, pharmaceuticals, and technology. They control organized crime within China and in the Golden Triangle, and compete with the Yakuza elsewhere in Southeast Asia. Outside of the Far East, they are strong in the Scandinavian countries and the Netherlands. It has criminal operations in Australia, North America, Germany, France, Spain, & Poland.

The Triad's biggest source of income is in the traffic of heroin, making $200 billion a year which is less than half of their annual revenue stream. It is the Triads who are primarily responsible for the discovery and development of nova drugs, controlling between 60-90% of the market share in Europe and North America. Every year they move hundreds of billions of dollars through their underground banking system. The Heaven Thunder Triad is so wealthy, that they have invested trillions of dollars in the financial institutions, and any action by law enforcement that threatens those assets risks bringing about a global financial crash. 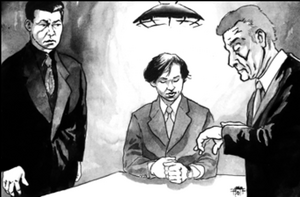