Save Titanic's passengers (under the 10th Doctor).

Redeemed Robots
The Heavenly Hosts, or sometimes called the "Hosts", were angelic service robots working for Max Capricorn Starcruisers and villains in the Doctor Who TV series.

The Heavenly Hosts were voiced by Colin McFarlane.

Under the command of Max Capricorn himself, the machines killed the majority of the passengers and crew of the Starship Titanic in 2008 as part of Capricorn's scheme to destroy his own ship and then retire a wealthy man. After Capricorn's death, the Host obeyed the next authority figure— the Tenth Doctor —and aided him in his saving of the Titanic.

The Host speech pattern involved starting a sentence with "information" and then the answer to a query. Protocol One allowed the person who executed it to ask three questions, which would temporarily override whatever command they were executing until the three questions were answered. The Host used the Halos on their heads as weapons, which they threw at enemies. They were capable of flight. Some of the Hosts were destroyed by an electromagnetic pulse set off by Bannakaffalatta, who used his cyborg body at the cost of his own life as he used up the last of his power. After Max Capricorn was killed by Astrid Peth, the Host reverted to the next highest authority, the Tenth Doctor, and stopped being enemies, helping the Doctor reach the bridge of the ship. 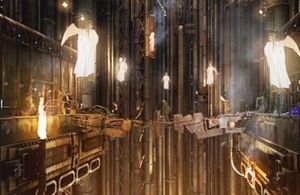 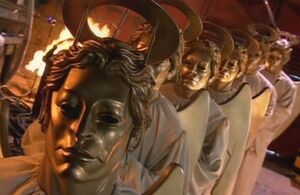 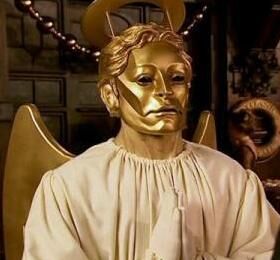 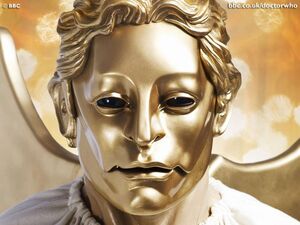 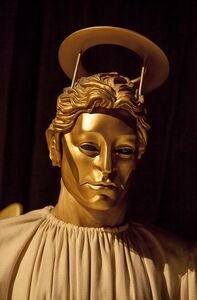 Retrieved from "https://villains.fandom.com/wiki/Heavenly_Hosts?oldid=3773967"
Community content is available under CC-BY-SA unless otherwise noted.