Leader of the Hard Boiled Heavies
Dr. Eggman's right-hand man
Commander-in-chief of the Eggman Empire
Leader of the Badniks

The Heavy King is a major antagonist in the Sonic the Hedgehog franchise, appearing as the secondary antagonist of the videogame Sonic Mania, and the main antagonist of it's expansion DLC Sonic Mania Plus, as well as the main antagonist of the Sonic the Hedgehog 30th Anniversary comic book special published by IDW Publishing. He is the leader of the Hard Boiled Heavies; an elite group of robots who were all empowered by the Phantom Ruby and serve Dr. Eggman. He can also be fought if the player chooses Knuckles in the Lava Reef Zone.

In the IDW Comics, he is rebuilt by Dr. Eggman to be the commander-in-chief of his Badnik army, on top of leading the Hard-Boiled Heavies.

Like the other Heavies, the Heavy King was once an ordinary Eggrobo. However, after being exposed to the Phantom Ruby's power, its appearance and personality changed.

Matching the Heavy King's name, it has a quite stereotypical knight/king design. It has a curved protuberance on its head, golden-bronze armor, a white crown symbol on its upper red and black colored body, spiked knee joints, spikey metallic shoulder pads, a red cape, and red-golden feet.

In this form, the Heavy King retains most of its older features, like the red and golden color scheme. However, its white crown is now a very intense red color and its armor is even more gold. It also has notably bigger arms and loses its legs, but instead gains the ability to fly. Although its most notable feature is its huge size.

Unlike the other members of the Hard-Boiled Heavies, The Heavy King is played more seriously. It is strongly hinted that he rules the Heavies with an iron fist. He is also certifiably insane just like the rest, though this is the fault of the Phantom Ruby as he was once a normal EggRobo before excavating it. He also watches his colleagues closely, implying that he is extremely quick to notice any potentially dangerous circumstances of a situation. In the IDW comics, he is also revealed to be just as, if not more self-absorbed than Eggman himself.

The Heavy King was once an ordinary-looking elite EggRobo created by Dr. Eggman to simply follow his commands. But one day Eggman ordered him to retrieve the Phantom Ruby and it's power transformed him alongside other elite Eggrobos into the Hard-Boiled Heavies, with the Heavy King now acting as their group leader.

The Phantom Ruby then transported Sonic, Tails, Knuckles, and the Heavies to Green Hill Zone, where the robots fled with the ruby in search for Dr. Eggman. However, after locating their creator, the Heavies refused to give him the ruby, forcing Eggman to snatch it from their grasp.

The Heavy King reappeared as the 2nd Act Boss of Lava Reef Zone where he attempted to steal the Master Emerald but is prevented from doing so by its guardian Knuckles the Echidna. However, the King didn't give up so easily and used the Emerald's power to increase his own, gaining the ability to levitate and fire energy from his scepter. Although this wasn't enough to defeat Knuckles, which forced Heavy King to retreat without the Master Emerald.

The Heavy King is seen again in Egg Reverie Zone as the Phantom King, after being further transformed by the Phantom Ruby. Despite this, the King still desired more power and tried to take the ruby for himself, leading to a three-way battle against Super Sonic and Dr. Eggman. Eventually, Phantom King was defeated by Super Sonic, who is sent with the Phantom Ruby to an alternate dimension.

In Encore Mode, it is shown that the Hard-Boiled Heavies were dumped in a pile on Angel Island. The Heavy King appears to be barely functional as he is given the Phantom Ruby by Heavy Magician and then uses its power to restore himself and the other Heavies to complete working order. Depending on whether or not all Chaos Emeralds are collected in Encore Mode, Heavy King may either finally succeed in obtaining the Phantom Ruby for himself or turn over a new leaf and offer the heroes a sundae at Mirage Saloon Zone. 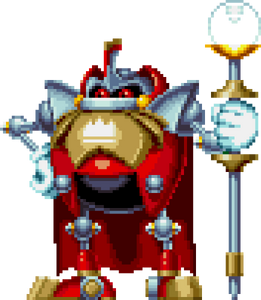 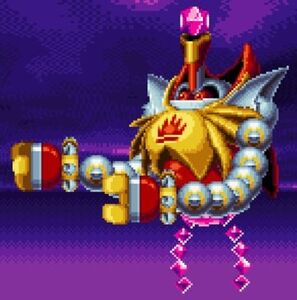 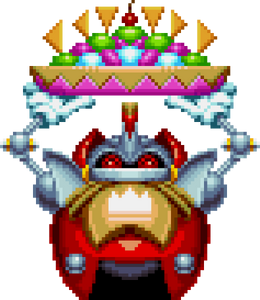 Heavy King as he appears in the Encore Mode Good Ending.