Destroy Sonic and his friends (failed).

The Heavy Shinobi is a major antagonist in Sonic Mania and one of the four secondary antagonists (alongside the Heavy Gunner, the Heavy Magician and the Heavy Rider) of it's DLC expansion Sonic Mania Plus. He is also a minor character in the Sonic the Hedgehog 30th Anniversary comic book published by IDW Publishing. He is one of the Hard-Boiled Heavies, an elite group of robots built by Dr. Eggman who were all empowered by the Phantom Ruby and serve their leader, the Heavy King. He is fought in Press Garden Zone.

Heavy Shinobi was originally an obedient Egg-Robo who served Dr. Eggman. However, after the Heavy King extracts the Phantom Ruby from below the ground, he, along with the rest of the elite Egg-Robos, had the animals stuck inside of them fuse with their AI, with each animal's individual personality reflected in their appearance. Thus, they transformed into the Hard-Boiled Heavies, and took away the Phantom Ruby.

Heavy Shinobi isn't seen again until Press Garden Zone Act 2, where he surprise attacks Sonic and his friends. During the battle, he jumps around the stage, firing his Asterons at Sonic and attacking him with his sword that freezes Sonic upon touching it. However, he is unable to stop Sonic and is eventually defeated.

Heavy Shinobi later returns during the final battle in Titanic Monarch Zone, now rebuilt and modified as the Phantom Shinobi, where he now shoots out shuriken-like blades at Sonic and rolls around his arena. His battle, however, is short-lived and fails to defeat Sonic.

Shortly after the events of Sonic Forces, the Phantom Shinobi was revealed to have been destroyed after the final battle in Titanic Monarch Zone and his remains had been left on Angel Island. However, with Classic Sonic's return, the Heavy Magician, who was able to survive being destroyed, steals the Phantom Ruby and gives it to the Phantom King, reviving him and the Phantom Heavies, but reverting them back to their pre-Phantom forms.

Heavy Shinobi maintains the same role as he did in Sonic Mania, trying to eliminate Sonic and his friends, only to be destroyed once more after the final battle in Titanic Monarch Zone.

After stumbling upon the Phantom Ruby, the Heavy Shinobi was given a makeover, giving him the appearance of a green haori. He has a yellow triangular cross-pattern chest piece which also appears on his hand and feet cuffs. He has a black bottom torso, red eyes, gray appendages and green zōri-like forefeet. To keep the ninja aesthetic, he also wears a dark green scarf.

Like the rest of the Hard-Boiled Heavies, he is shown to be rebellious and reckless. However, being the ninja of the Heavies, he is stealthy, elegant, elusive and only strikes at the most opportune time. But just like the rest of his allies, he wishes to destroy Sonic and friends whether he takes orders from Eggman or by his own chaotic nature. 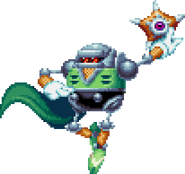 The Heavy Shinobi after being created.

The Heavy Shinobi with his creator and allies.

The Heavy Shinobi (left corner) seen as a silhouette in the Friends animated sequence.

The Heavy Shinobi (middle right) as a silhouette.