The Shadow of War

Grand Master of the Iron Order

Kill everyone he comes across.

Hecarim, also known as The Shadow of War, is a villainous playable character in the multiplayer online battle arena game League of Legends. A nightmarish fusion of man and horse, Hecarim is the commander of the Shadow Isles' legions of undead, leading his riders into battle every Harrowing to slaughter the living.

The 96th champion added to the game, Hecarim was released on April 18, 2012. He is most commonly played as a jungler due to his high mobility, but can also be played in top lane.

He is voiced by Scott McNeil, who also voiced Sion in the same game, and also portrayed Dr. Wily in the Ruby-Spears Mega Man cartoon, the Evil Masked Figure in Scooby-Doo 2: Monsters Unleashed, the Overlord, Nadakhan and Clouse in LEGO Ninjago, Flam in My Little Pony, Mortum in Max Steel, and Tall Boy in Riverdale.

A lieutenant of the Iron Order, Hecarim protected King Viego with diligence. As a knight, he was among the most successful of the order, leading his riders to victory for the empire time and time again, and eventually caught the eye of the knight commander. Over time, the commander began to groom Hecarim as a potential successor, but the more time he spent with the young lieutenant, the more he realized that he had made a mistake. Hecarim was arrogant, dishonorable, and obsessed with his own personal glory, all signs that Hecarim should never lead the Iron Order.

When the commander informed Hecarim of his concerns, it infuriated the lieutenant, but Hecarim was unable to speak out against his superior. But the next time the commander was surrounded in the field of battle, Hecarim ignored his cries for help and left him to die. No one ever found out about Hecarim's betrayal, as the commander was later found dead with no witnesses. Hecarim's plan for revenge had worked, and now he was the new knight commander of the Iron Order.

Knight Commander of the Iron Order

Hecarim led the Iron Order to the capital to formalize his new position as commander and met with Kalista, the king's niece and most trusted general. When Queen Isolde was poisoned by an assassin, Kalista trusted Hecarim to protect the king as she sought out a cure. However, in Kalista's absence, Viego quickly went mad with paranoia and sent the Iron Order to crush all dissidents across the kingdom. Hecarim relished his role as the king's enforcer, and the Iron Order earned a reputation as some of the harshest and most ruthless knights across Runeterra, burning entire towns and killing hundreds of civilians.

When the queen died, Hecarim manipulated the king's grief to pin the blame on the foreign lands, in hopes that he would sanction invasions outside the empire's borders. But before Viego could come to a decision, Kalista returned with information of a cure. However, the queen was already dead, Kalista stated that the cure would no longer work. Refusing to believe this, the king imprisoned Kalista as a traitor. Hecarim visited Kalista's cell to ask what she had learned, and she told him about the sacred Waters of Life on the Blessed Isles, an archipelago hidden from invaders by a pale mist.

Realizing he could claim the magic and riches of the Isles for himself, Hecarim manipulated Kalista into guiding the king's fleet through the mist, stating that if Viego heard from the elders themselves that the queen could not be cured, then maybe he would listen to reason. Kalista agreed, and the Iron Order set sail with Viego, along with the queen's dead body.

Ruination of the Blessed Isles

When they landed in the Blessed Isles capital city of Helia, the masters of the city refused to grant the king access to the Waters, stating that reversing her death would be a perversion of nature. Enraged, Viego ordered Kalista to kill them. Kalista refused, expecting Hecarim to uphold his end of the bargain and stand with her. But Hecarim simply smiled before impaling the general with his spear, then ordered his knights to ransack the entire city for its loot and magical artifacts.

Hecarim relished the chaos and bloodshed, so much so that he never stopped to notice that his king had disappeared, guided to the Waters of Life by a traitorous Helian custodian. When the Ruination took hold, Hecarim and his knights were taken completely by surprise, their horses whipped into a terrified frenzy. The blast of magic turned the veil of fog around them into a horrifying Black Mist, which consumed the knights of the Iron Order one by one as they tried to escape. Soon, Hecarim was alone as he fled to the ships, but it was to no avail as the mists consumed him whole.

Twisted by the sinister magic, Hecarim and his steed were fused into a single abomination, a spectral rider doomed to patrol the Shadow Isles for an eternity. Bound to the Black Mist, Hecarim serves his king just as he had in life, but dreams of escaping the Isles so he can once again conquer new lands and feel the glory of battle once more. Every Harrowing, Hecarim leads the charge of the restless spirits, slaughtering every living being he can find as a way to continue his long-forgotten reign of terror.

In game, Hecarim is a diver-type champion, a fighter that uses his high mobility to charge into high-priority targets. Hecarim's passive, Warpath, grants him more attack damage whenever he gains movement speed.

Hecarim can use Rampage to swing his glaive to strike nearby enemies, Spirit of Dread to deal magic damage in a radius around him, and Devastating Charge to gain movement speed for a short duration before knocking back targets.

Hecarim's ultimate, Onslaught of Shadows, summons a band of spectral riders that charge in a direction from behind Hecarim, fearing enemies and dealing magic damage in their path.

In life, Hecarim was as proud as he was cruel, riding into battle in hopes of thrill-seeking and his own personal glory. As a result, Hecarim was a very selfish knight, and was not against using dishonorable tactics to get what he wanted. As the king's chief enforcer, Hecarim became even more arrogant and ruthless, cutting down dissidents even when it was clear the monarch had gone mad. An opportunist, the knight commander betrayed both his predecessor and Kalista, leading to a harsh rivalry between himself and the Spear of Vengeance in undeath.

As the Shadow of War, Hecarim shows little remorse for his crimes in life; in fact, he seems even more ready to inflict pain than ever before. The Black Mist has granted Hecarim a new purpose in undeath, and his thirst for battle and glory hasn't gone away one bit.

Hecarim as he appears in Legends of Runeterra.

Another version of Hecarim's artwork. 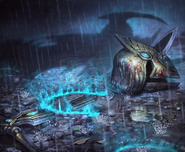 A teaser image for Hecarim.

The Harrowing Tales of the Black Mist Cinematic - League of Legends

Hecarim, the Shadow of War Login Screen - League of Legends