Hunt down and defeat the Witch of Greed (outcome unknown).

Hector, also known as the Devil of Melancholy or simply Melancholy, is an enigmatic antagonist in the 2014 Japanese dark fantasy light novel series Re:Zero − Starting Life in Another World as well as its anime television series adaptation of the same name. He first appeared as a flashback antagonist in the fourth story arc and has yet to reappear in the story.

Around four hundred years ago, the Devil of Melancholy attacked the Sanctuary, a base-of-operations of sorts utilized by the Witch of Greed Echidna. Although his reasons were unknown, Hector sought something located within the Sanctuary. His path was blocked by the greatest mage of the era Roswaal A. Mathers, who Hector proceeded to brutally beat in a battle. In order to protect her apprentice Roswaal, Echidna confronted Hector and the pair of Witches began a duel. Although the victor of the battle remained unclear, Echidna survived.

Eventually, the Witch of Envy Satella devoured six of the other Witches (including Echidna) and destroyed half of the world before being stopped. Alongside Pandora, Hector was the only other Witch of Sin who was not confirmed to be devoured by Satella. Whereas Pandora was known to survive past the calamity caused by Satella, Hector's status remained unclear. By the present day, information of Hector's existence was almost completely forgotten. The only person known to readily have knowledge regarding Hector was the Beast of the End Puck, an artificial spirit that had been created by Echidna around the time when the Witches still wandered the world.

Hector is voiced by Junichi Suwabe in the Japanese version of the anime and by J. Michael Tatum in the English version. Suwabe has also voiced Grimmjow Jaegerjaquez in Bleach, EMIYA and Siegfried in the Fate franchise, Eraser Head in My Hero Academia, Sukuna in Jujutsu Kaisen, Leone Abbacchio in JoJo's Bizarre Adventure, the The Undertaker in Black Butler, Vergo in One Piece, and Kyogai in Demon Slayer: Kimetsu no Yaiba. Tatum has also voiced Commander Erwin Smith in Attack on Titan, Tenya Ida in My Hero Academia, Acnologia in Fairy Tail, Sebastian Michaelis in Black Butler, Rintarou Okabe in Steins;Gate, and Fuegoloen Vermillion in Black Clover.

Hector had the look of a young man around twenty years of age with a tall body and slender frame. His long messy charred-brown colored hair was tied into a braid that trailed down to his butt. His black eyes had heavy bags under them that gave off the impression of a sickly person. His mouth was slightly puckered and his cheekbones were fairly pronounced. The color of his face was poor and his posture was crooked, which, when coupled with his worn eyes, gave the impression of someone who found it demanding to put on clothes and leave the house. Indeed, every part of Hector's demeanour portrayed lethargy and a general lack of vitality. Rather paradoxically, Hector wore clothing reminiscent of a jester's, despite the lack of joviality conveyed by his attitude and posture.

Mirroring his Authority, Hector exuded negativity and often expressed his depressing thoughts out loud. He had a tendency to draw out his pronunciation of random words, a manner of speaking that was adopted by Roswaal after the Warlock of Melancholy defeated him.

Hector, a young man with a gloomy outlook on the world, came into contact with and absorbed the Melancholy Witch Factor. The power granted by the Witch Factor, called the Authority of Melancholy, allowed Hector to apply immense physical pressure on whatever he wanted. There were eight other Witch Factor bearers collectively known as the Witches of Sin, seven of which possessed Witch Factors that represented one of the seven deadly sins. Hector became known as the "Devil of Melancholy."

Hector and the eighth Witch, Pandora, both represented sins not considered parts of the orthodox seven deadly sins. Coupled with the fact that knowledge of their existences was relatively obscure, Hector and Pandora were considered "forgotten sins." Hector was acquainted with the Witch of Greed Echidna whom he considered attractive. However, their relationship turned sour for unknown reasons and Hector began pursuing Echidna across the world.

Attack on the Sanctuary

Echidna eventually formed a base-of-operations known as the Sanctuary of Kremaldy that rested within a large forest and was primarily populated by demi-humans. Hector learned of the base's location and approached the territory to confront Echidna. Before he could find the Witch, Echidna's magic apprentice Roswaal A. Mathers confronted the Devil. Melancholy fought Mathers, and despite Roswaal being the greatest mage of the era, Hector gravely wounded him with his Authority. As the mage fell to the ground, Melancholy rhetorically asked him if he wanted to continue. The agonizing moans produced by Roswaal irritated Hector, who continued to rend the flesh of his helpless opponent. Once again Hector suggested a surrender, even going as far as to commend Mathers for his effort. Yet the young mage rebutted the offer, prompting the Devil to twist and crush the flesh and bones of his victim. The pain he inflicted on his foe made Hector feel disheartened, as he didn't enjoy hurting others.

Suddenly, Hector sensed a person breathing and watching him from inside a nearby cabin. Believing that the breathing belonged to Echidna, the Devil turned his hand towards the cabin in order to crush it and its occupant with his Authority. However his attack was interrupted by Roswaal, who unleashed a powerful fire magic spell in his direction. As the sudden inferno approached, Hector expressed how depressing breaking a sweat was before promptly pounding the attack into the dirt. Seeing his final attack sizzle out, Roswaal damned his opponent. Hector defended himself, stating that he'd never wanted to become the Devil of Melancholy. Mathers admonished Hector for acting like the victim, a statement that worsened the Devil's mood further. Hector struck Roswaal with his Authority once again, causing him to lose consciousness. With his opponent finally silenced, Hector turned towards the cabin and crushed it with his power.

The person within, who was actually a young half-elven girl named Ryuzu Meyer, was also crushed by the Authority of Melancholy. Just before Meyer would've passed away, the Witch of Greed finally made it onto the scene. Appearing behind the crushed cabin, Echidna apologized for her tardiness as she dissipated Hector's Authority. Although surprised by Echidna's capability to negate his Authority, Hector remained indifferent and assured her that her apprentice had made up for her lateness. Echidna commented on how Hector's apathetic attitude hadn't changed at all, prompting the Devil to remark that her personality wasn't as cute as it had been in the past. Hector told Greed that he would allow her a moment to cry over the state of her gravely wounded apprentice, although she rejected his offer considering he was the one who had damaged him. The pair instantly began amassing their power for battle. As Ryuzu left the scene, the air became thick with the raw energy permeating it. Shortly thereafter, Ryuzu sacrificed herself to raise an impenetrable and permanent barrier around the Sanctuary that stopped the Devil from finishing his job.

Although what became of Hector after the attack on the Sanctuary remains unknown, Echidna and Roswaal survived the encounter. Strangely enough, Hector's role in history was unrecorded, meaning only a handful of individuals remembered him. Sometime after Melancholy's attack, Echidna's body was destroyed by the Holy Dragon Volcanica who sealed her soul in a tomb in the Sanctuary. The only people who could enter and leave the Sanctuary at will were those who didn't possess demi-human blood. Over the next few centuries, the demi-human population of the Sanctuary sought to disable the barrier by completing a set of trials inside the Tomb of Echidna. However, they were never able to do so.

The battle of the Sanctuary deeply affected Roswaal, who took to adopting Hector's mannerisms so that he would never forget the humiliation of the fight he lost. Mathers went as far as to mimic Hector's strange method of speech and bizarre dress sense. Around four centuries later, a clone of Ryuzu Meyer named Ryuzu Shima possessed fragments of her genetic template's memories, including her brief encounter with the Devil of Melancholy. She recounted the events that transpired on that day to Subaru Natsuki, Garfiel Tinzel, Otto Suwen, and Ram. Puck, a Great Spirit created by Echidna, reminded Mathers that he would never be as powerful as Hector during a battle between them. 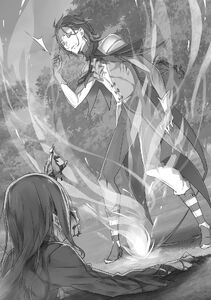 Hector standing over his defeated opponent Roswaal A. Mathers after destroying his final attack. 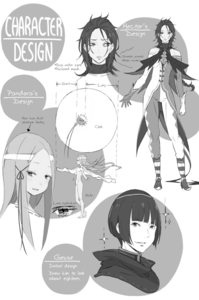 Concept art of Hector, Pandora, and Geuse illustrated by Shinichirou Otsuka in the fourteenth volume. 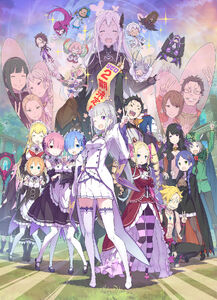 Hector floating around Echidna on the announcement illustration for season two of the anime. 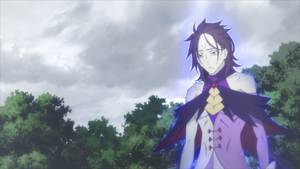 Hector standing over Roswaal A. Mathers, who he soundly defeated in a fight despite the mage's power. 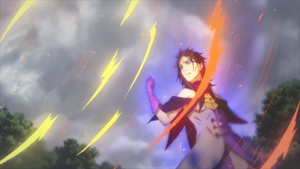 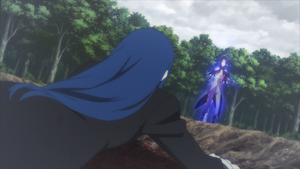 Melancholy tried to defend his actions by claiming that he was a product of his personal history. 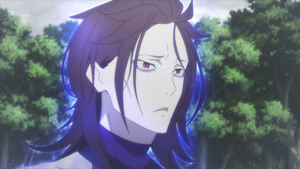 The Devil of Melancholy noticing the rather abrupt arrival of the Witch of Greed Echidna. 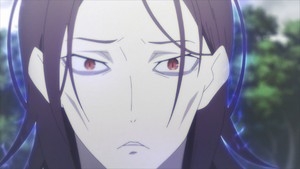 Hector, having finished his short conversation with the Witch, prepared to do battle.