Hanging out with Muscle Man (formerly).

Hector is a traitorous fireworks dealer that runs a secret business called "South of the Line" and he is also Muscle Man's former friend and arch-nemesis. He is the main antagonist of Regular Show episode "Firework Run".

He was voiced by Andres Salaff.

Muscle Man, High-Five Ghost, Mordecai, and Rigby go to him in order to buy some fireworks since Muscle Man accidentally blew up the fireworks needed for the 4th of July. Hector at first agrees to buy them the fireworks, but then tells them that the fireworks cost them double their amount. Rigby then asks if they can buy "El Diablo". Hector tells them it is prophesied that if El Diablo is lit, it would kill him, and thus tells Rigby it is not for sale. A desperate Muscle Man begs for Hector to give them the fireworks. Hector kicks Muscle Man out of the way, and tells him that he will give them the fireworks, on the condition of bringing a package to his friend Armando. They give the package to Armando, and he tells them to sit down to wait for them. Suddenly, Rigby gets too impatient for waiting and the four groundskeepers accidentally stumble upon the "South of the Line" factory, realizing that Hector and his gang put gunpowder in their "South of the Line" chilli rellenos. Armando then signals his henchmen to stuff the four groundskeepers in burlap sacks to take to Hector. Hector gets upset that the four have stumbled upon his factory. He knows that the four are not going to share his secret, since he'll blow them up with dynamite, and goes inside his office to watch them get killed. Muscle Man and the rest of the groundskeepers walk forward and manage to escape.

Hector in a fit of rage tells his gang to hurry up in unlocking the door to get them, but Muscle Man and the others manage to get El Diablo. Muscle Man then gets one of the chilli relleno grenades and tosses them toward a box of others, causing the whole factory to explode. However, Hector survives and is shown to be a cyborg, as half of his head and arms are metallic. He forces Benson to give him his lighter and attempts to kill the four groundskeepers with a rocket gun, but the four groundskeepers manage to dodge the attack and that causes him to set off El Diablo. After creating a gun show for the people at the Park, El Diablo sees Hector and says his name. Hector tries desperately to run away from the firework, but El Diablo fires his firework bazookas at Hector, sending him flying toward the neon "South of the Line" billboard, which explodes, killing Hector in the process, and ending his reign of terror forever.

Hector is a very sadistic, traitorous and psychopathic person who has no problem in killing others. He is a criminal, evident by his illicit business as well as putting gunpowder in his South of the Line Chile Rellenos. His past as to how he became a cyborg, as well as how he knew Muscle Man is unknown. 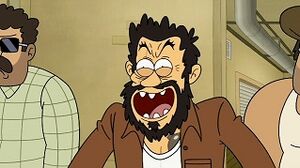 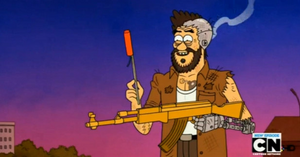 Hector as a cyborg (his true form). 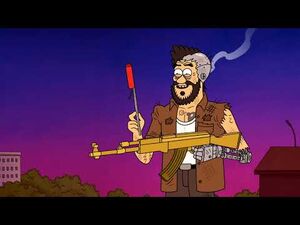