Member of The Brotherhood

Keep all away from The Dark Kingdom by any means necessary. (failed)

He was voiced by Kim Coates.

25 years ago, he served King Edmund alongside Quirin and Adira. When the king became ill, Hector toke an oath to follow the king's dying wish to prevent anyone from finding the Dark Kingdom by any means necessary. However, Adira wants to find the Sun Drop, which Hector dismissed, due to believing it's just a myth. He allowed her to go and try to find the Sun Drop but said that if she ever returned, she'll be deemed as a traitor and he'll kill her. Sometime later, he went to the Great Tree and lived there for many years to make sure no one gets to the Dark Kingdom.

25 years later, in "Rapunzel and the Great Tree," he spotted Rapunzel and her friends heading to the Dark Kingdom and pursued them riding rhinoceros. Adira arrived to save them, Hector recognized Adira and had a fight with her. Fortunately, Rapunzel and her friends were able to get away from him by using their caravan fall off the cliff, making Hector think they fell with it and died. Hector went down the canyon to make sure they were dead but when he saw that they weren't inside he pushes the caravan into the river in frustration and runs back to the Great Tree, knowing they'll go there.

After a while of searching, he found them inside the tree. He grabbed hold of Cassandra before getting challenged by Adira and getting into a fight with her. During the battle, he accused her of being a traitor for going against the king's wishes, which Adria disagrees with. But Hector does regret the circumstances that brought them to fight and apologizes to her before turning to try and kill Rapunzel to stop her for good. But Cassandra challenges him to a fight, which he agrees with. Hector is easily able to overpower Cassandra. When he leaned down and taunts Cassandra asking her what she's waiting for, but then Cassandra throws some dirt on his face, which temporarily blinds him and pushed him off the ledge.

He survived the fall and spotted Demanitus's enchanted spear, sticking into the Heart of Zhan Tiri's Tree. Despite knowing it, he tells Lord Demanitus to forgive him for unleash a great evil that sleeps within, he takes the enchanted spear out, intending to use it to stop Rapunzel and her friends, but it went horribly wrong when he was possessed by the tree's power. While controlled by the tree, he attacks Rapunzel and her friends and nearly succeeded. But when it seems hopeless, Rapunzel used the Moon Stone's incantation that they learned earlier in the tree to destroy it and the plants holding Hector and her friends in its grip. With the tree collapsing, Hector regained enough of his senses to tell Rapunzel that Adira's lying to her and if she goes to the Dark Kingdom, she is doomed. But then the plants let go of him and he starts falling down the same ledge again. But Adira jumped in and managed to save him and herself from the fall. He was severely weakened, so Hector was carried away by his Rhinoceros with Adira following him.

He makes a cameo at the end of "Race to the Spire" having his mind controlled by Cassandra after she got access to the mind-trap.

He reappears in the episode "Once a Handmaiden" still under the control of the mind-trap helping Cassandra take over Corona against his will.

He is later seen in "Plus Est En Vous" still under Cassandra's control he helps Cassandra with keeping Corona under her control and protecting the mind-trap against his will. He is later freed when King Edmund breaks free of the control enough to destroy the mind-trap. He also helps the people of Corona later on in defeating Zhan Tiri. He is last seen heading back to the Dark Kingdom with King Edmund and Adira to rebuild the fallen Kingdom. 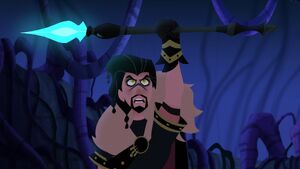 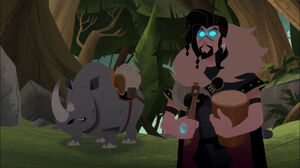 Hector being mind controlled by the mind-trap 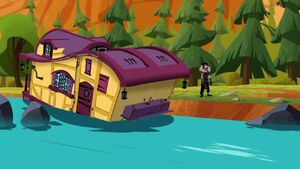 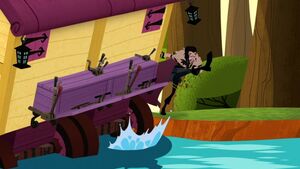 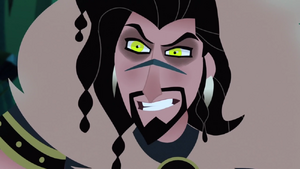 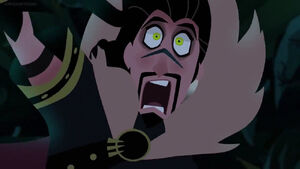 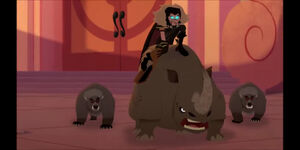 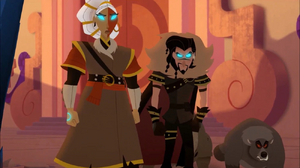 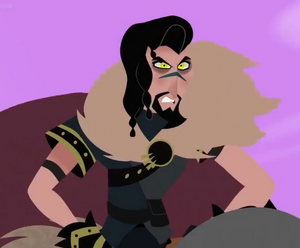 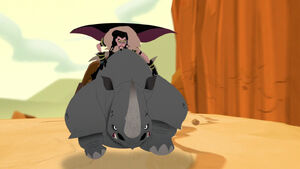 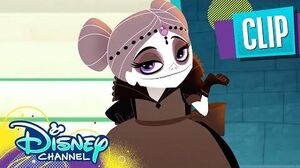 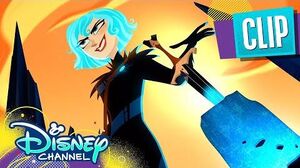