Kill anyone who poses a threat to his boss Jean Vilain.

Hector is the secondary antagonist in the 2012 action film The Expendables 2. He is a high-ranking member and the second-in-command of a terroristic mercenary faction known as The Sangs, as well as the right-hand man of their leader Jean Vilain.

The character was portrayed by Scott Adkins, who also played Lucian in the MCU film Doctor Strange and Weapon XI in X-Men Origins: Wolverine.

Hector is a martial artist, terrorist, and notorious war criminal who at some point became affiliated with a notorious terrorist-mercenary organization known as The Sangs; he steadily became the group's second-in-command as well as the right-hand man and personal subordinate of their infamous leader, Jean Vilain.

Soon enough, the Sangs came into conflict with an elite mercenary group called The Expendables when both parties crossed paths in Albania - as the Expendables had travelled there to recover a special computer system with the location of five tons of plutonium. Hector helps Vilain and the Sangs capture Billy "The Kid" Timmons, a young sniper working with the Expendables, and demands that the Expendables hand over the computer in exchange for Billy's life. Even after they retrieve the item, Hector holds a knife in front of Billy while Vilain roundhouse kicks it into his heart, killing him. Hector, his boss and the other Sangs then depart in a helicopter.

Vilain and the Sangs then travel to an abandoned mine housing the hidden plutonium, where many inhabitants from the local villages are being forced to work. When an elderly worker claims he is tired, Hector shoots him dead. In the climactic battle between the Expendables and the Sangs, Lee Christmas fights Hector as he is about to take off in a helicopter, eventually killing him by pushing his head into the helicopter's rotor blades.

Hector and the gang of Sangs. 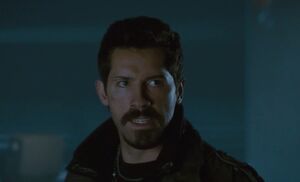 Hector in the abandoned mine. 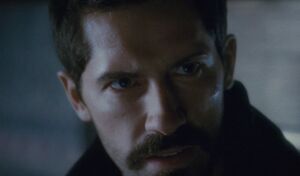 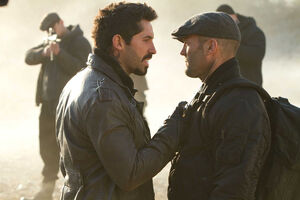 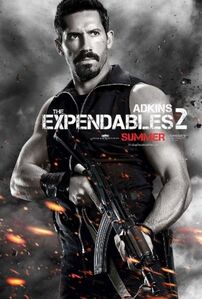 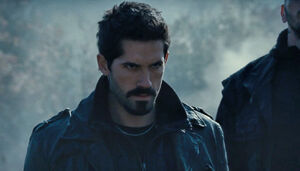 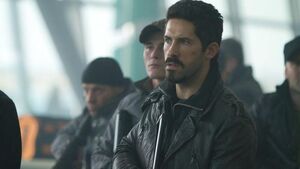 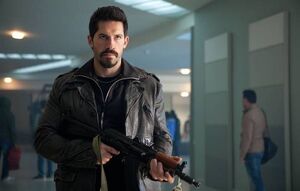