Get together with Carol.
Get revenge on Hal Jordan for "ruining his life" (both failed).

Hector Hammond is the central antagonist of the 2011 DC Comics sci-fi movie Green Lantern. He is the son of senator Robert Hammond and an old friend of Carol Ferris and Hal Jordan. After getting infected with the DNA of a being known as Parallax he becomes insane and turns into Hal's first enemy.

He was portrayed by Peter Sarsgaard, who also portrayed Gene Carson in Flightplan and Bartholomew Bogue in The Magnificent Seven.

Differing from the comic book origins slightly, Hector Hammond is an average biology teacher who was an old friend (yet also a rival) of Hal Jordan's along with Carol Ferris, and also the estranged son of United States senator Robert Hammond. He has been in love with Carol since they were children.

He was summoned by Amanda Waller and the US government to conduct an autopsy of Abin Sur due to his father's influence, while performing this task he accidentally pricks his finger against a yellow spark inside of his exit wound, leading to him becoming infected with the DNA of Parallax. Symptoms don't start for Hammond for a while however one night he wakes up screaming in agony and goes into the bathroom to wash his face and try to calm himself where he notices that his eyes have a yellow tint to them which comes and goes. While teaching a lesson the next day Hammond hears the thoughts of one of his students who is disrespecting and mocking his teachings. In a fit of fury he uses his powers to throw the student from his desk onto the floor injuring him, he dismisses the horrified class after this and goes home to prepare for his father's party. At the party Hector reunites with Carol and Hal and catches up with them however he also learns of his father's feelings towards him, still viewing him as a failure and a waste of space, causing Hammond to try and kill his father by crashing his helicopter before Green Lantern saves the day. Hammond goes home exhausted and defeated and experiences further symptoms for Parallax's DNA and screams in agony as his cranium grows into an insane size, this causes a full on breakdown in Hammond who destroys all of his equipment.

Hammond is then taken into the government base to be watched by Waller and his father, who come up with a cure for his alignment, unfortunately Hector is too far gone at this point and refuses the cure and attacks the two, although Waller was rescued by Green Lantern in time, his father was burned alive. Hammond then collapses onto the floor having lost the ability to walk and uses the powers to uncover that Hal is actually Green Lantern and he and Carol have became romantically involved, leading him into having another mental breakdown before being left alone by Hal. After this Hector captures Carol in an attempt to lure Hal back to him and succeeds.

Hammond at this point has lost nearly all of his mobility aside from in his arms and his respiratory system appeared to be failing. He tells Hal of his intentions to give Carol the influence of Parallax so they can be together and have him out of the picture. Surprisingly however he cuts a deal with Hal, promising to let Carol go if he gives him his Lantern ring, Hal complies only for Hector to reveal he lied before trying to kill Hal with a blast. Hal then reveals however that he retains control of the ring even when it is on Hammond's finger as the ring chose him rather than the other way around. Horrified Hammond is confronted by Parallax who sucks the life energy out of him before throwing his corpse to the floor as punishment for his failure.

Hector was quite a shy, timid, insecure and bitter man full of envy and misery due to his father's treatment of him. He held a grudge on his old friend Hal Jordan, blaming him for all of his misfortune and torment although still tried to be civil around him as he still did view him as a friend. He had also loved his other closest friend Carol Ferris since childhood although was never willing to confess his feelings.

After Parallax's DNA infected him Hector slowly but surely completely lost his mind and become a sadistic, raving, maniacal lunatic who would react in extreme manners towards every single situation he found himself in.

At first Hector was a fair skinned, slim, handsome man in his thirties with slicked back brown, curly hair which was slightly receding at the crown, he also had a thick moustache. Shortly after being infected with Parallax's DNA his eyes would on occasion glow a deep shade of yellow, in particular when using his powers, as the infection accelerated these physical symptoms only got worse with his eyes permanently becoming yellow and his skull expanding to an enormous size, giving him a hideously deformed cranium while also increasing his intelligence and psychic abilities.

Earlier in the film Hammond was quite well dressed, often wearing suits, dress shirts, etc due to wanting to keep up a formal appearance for work and social events, when outdoors as well he would wear an elegant black trench coat. After his full transformation however he wore casual clothes for a while such as a T-Shirt, jeans and hoodie, however reverted back to his more formal attire in his final confrontation with Hal were he was seen with his coat again. 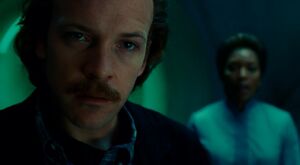 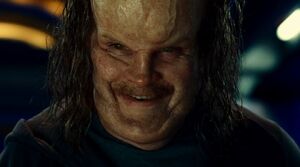 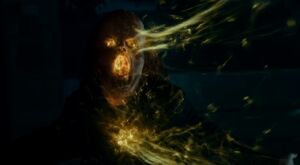