Hector the Toad is a Colombian gang leader and a minor antagonist in the 1983's film Scarface.

He was portrayed by the late Al Israel.

It is unknown whom Hector's parents were or what he has endured in his past. However, during the 1970s he moved to Miami and started cocaine dealings with a gang of malefactors. He was efficient and worked up himself to be a successful drug dealer.

In the 1980s, he came to turns with Tony Montana for a lucrative drug deal. Hector and some of his henchman were tenants at a hotel called the Sun Ray Hotel. Tony and his partner Angel are given the task from crime lord Frank Lopez to claim the drugs.

Upon arrival however, the deal goes askew. Tony and Angel are abducted and held hostage in the hotel room and tied in the bathroom for interrogation.

Hector grabs his chainsaw and mutilates Angel to death while Tony is forced to watch his friend be murdered, but before Hector could kill Montana, Manny intervenes and eliminates his two henchman, and Hector briefly escapes through a window after being shot in the stomach.

Hector runs through the streets where he attempted to escape Montana in the streets, only ending up with him getting shot in the head. 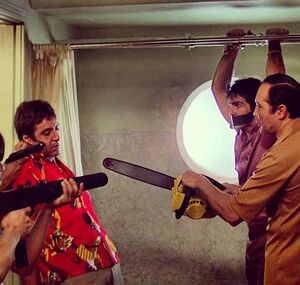 Hector the Toad threatening Tony with a chainsaw. 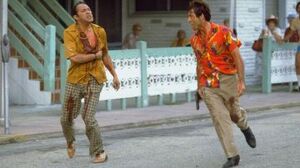