Hedig was a Löwen, and the leader of Carnival Metamorphosia, where he abused his followers, forcing them to show there true selves to often, leading to them beginning to lose control. He is a villain in the Season 3 episode "The Show Must Go On" of Grimm.

To cover up his crimes, Hedig had been murdering people for years, to make certain that he could have a hold over his employees as well as keep himself in business. According to him, he ran away from home when he was 13, and bought the carnival in 2004 from its original owner who taught him all he knew.

His pushing his staff to far lead to problems, especially from Max, a Blutbad who was starting to show signs of losing control. Following two women inviting Max over one night to try and get him to show them how he did the trick, Max lost control and scared them. To cover it up Hedig murdered the women, and left Max who had no memory of the events thinking he did it. Investigating the murder, Nick and Hank arrived to talk, Hedig managed to keep quiet, and cover up there supposed masks.

Later after Max lost control again, he accidentally injured his girlfriend and fellow performer Genevieve. Angered by this Hedig ordered they hire a new girl as Genevieve couldn't perform. By accident he hired Rosalee, who had arrived to investigate the claim of mistreatment. This however angered Max, who felt Genevieve was being replaced. However, Hedig faced him, warning he would be imprison if it wasn't for him, he revealed it was him who killed the girls, but blackmailed Max as the police would think it was him.

However, during the act, Max lost control and attacked Rosalee. Meanwhile, Nick and Hank arrived, seeing Nick and realising he was a Grimm, Hedig ran for his life. However, in the funhouse he was confronted by his staff for all his abuse, he tried to talk his way out, but was killed when Ivan (a dragon like creature) burnt him to death. 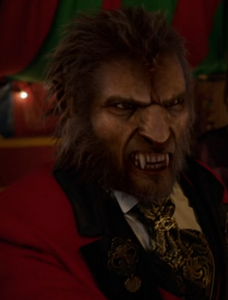 Add a photo to this gallery
Retrieved from "https://villains.fandom.com/wiki/Hedig?oldid=3472611"
Community content is available under CC-BY-SA unless otherwise noted.