Heihachi Mishima is a fictional character and was one of the main antagonists in the Tekken series. A vile and power hungry monster, he is almost always responsible for the events of the games but later his impact seems to decrease as of Tekken 5 and onwards reduced as a plucky comic relief.

Heihachi Mishima is the son of Jinpachi Mishima, the head and founder of the Mishima Zaibatsu. However, he takes over the company and imprisons his father beneath Hon Maru for years.

He married a woman named Kazumi and had a son named Kazuya. In order to prove he is strong, Heihachi threw his son over a cliff to see if he can climb back up. Kazuya succeed, but only because he inherited the "Devil Gene" which made him extremely powerful. Later he adopted the Chinese orphan Lee Chaolan, but he did this only for giving Kazuya a rival and he never cared about him.

Heihachi announces the King of Iron Fist Tournament to test his son fighting skills. Kazuya defeated him, and got thrown into the same cliff as a child.

Heihachi got back Mishima Zaibatsu after defeated Kazuya. He organized Tekken Force and sent them to produce food and feed poor people in order to gain a support world leaders.

15 years later Tekken Force in the Middle America dug a still a mysterious creature. Heihachi learned that the creature can be legendary God of Fighting Ogre. Heihachi thought that if he capture Ogre he will rule the world.

One day Heihachi was visited by 15-year-old boy Jin Kazama who was his grandson and Kazuya's son. Jin told him what was happened with his mother Jun Kazama and Heihachi convinced that Ogre is a reason for the disappearance of the best fighters in the world. In the nineteenth Jin's birthday Heihachi announced the King of Iron Fist Tournament 3. He also saw that Jin has a dangerous force which Kazuya had too. Heihachi decided to kill Jin after he capture Ogre.

When Jin defeated Ogre Tekken Force with Heihachi started shooting to him. Then in Jin awakened Devil Gene. He attacked Tekken Force and Heihachi and flew away.

Heihachi failed to capture Ogre, but with the help of scientists, he collected his blood and tissues. It was used to create a new life form by combining Heihachi's and Ogre's genetic material. Experiment failed, but Heihachi learned that the Devil Gene is necessary to integrate Ogre's genome with his own. To get the Devil gene Heihachi searched Jin, who had transformed into the Devil in the last Tournament.

During the searching he learned that body of his son Kazuya, whom he killed 20 years ago was stored in biotech firm called G Corporation. Heihachi sent Tekken Force to raid G Corporation to obtain Kazuya's remains. The mission ended when Kazuya revived by G Corporation retaliated.

To create a new life form Heihachi needed the body of Kazuya or Jin, because both have Devil Gene. He decided to announced the King of Iron Fist Tournament 4.

During the Tournament Heihachi ordered Tekken Force to capture Jin. In the final battle he was fighting with Kazuya, and defeated him. He didn't kill him and they both went to Hon Maru. When Kazuya saw Jin he deafened Heihachi. When he awakened Kazuya was unconscious after battle with Jin. Heihachi decided defeat his grandson, but Jin transformed into the Devil. He was near to kill him, but suddenly he said "Thank my mother, Jun Kazama" and flew away.

After their loss to Jin Heihachi and Kazuya in Hon Maru were attacked by the Jacks sent by G Corporation. The two worked together until Kazuya sold him out by tossing him to the Jacks. A Jack just activated a self-destruct sequence, and Heihachi was presumed dead.

In reality, he was just tossed a few miles away from the explosion and landed on a graveyard. He was unconscious for weeks and awaked to learn that the Mishima Zaibatsu is taken. Because of that, Heihachi entered the King of Iron Fist Tournament 5 to regain his company.

In previous tournament Heihachi battled with Raven. After fight, he returned to Mishima Zaibatsu. Suddenly, his entry has been blocked by Jin, who has taken over the Mishima Zaibatsu. Heihachi enters the King of Iron Fist Tournament 6 in order to regain his company.

In Scenario Campaign Heihachi met his son Lars Alexandersson, who defeated him.

Heihachi makes an appearance as one of the playable character in the video game; Playstation All-Stars Battle Royale.

As Heihachi been fight off these warriors one by one, he was utterly disappointed, and that none could truly test his abilities. Shortly after, Heihachi encountered the cats; Toro and Kuro, while thinking that the trial was a waste. While that was going on, Toro and Kuro were trying to figure out if they were staring at Heihachi, but during the conversation, Toro accidently called Heihachi an elder Warrior. Angered, Heihachi replied by asking if he looks like a feeble old man. Toro tried to tell him he meant no harm, but Kuro replied if Heihachi is feeble or not. More enraged, Heihachi confronted both Toro and Kuro at the same time. Despite Heihachi being outnumber 2 to 1, Heihachi managed to defeat both Toro and Kuro.

Shortly after the defeat of Toro and Kuro, Heihachi encountered Polygon Man. The two fought each other, but Heihachi managed to defeat Polygon Man and acquired his power. After the defeat of Polygon Man, Heihachi was proud of himself, that he did better than he expected. He also replied that the formula gave him strength and reflexes that he hadn't felt since the prime of his youth. He also thought that the formula did more than he expected, and that it gave him a power like no other. With this new power, Heihachi decided to use this power to take over the world.

Like every characters in this Playstation All-Stars Battle Royale, Heihachi has three super moves that can be used during a fight. 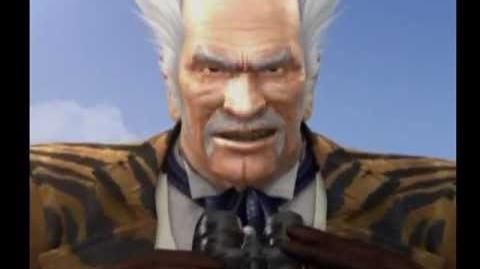 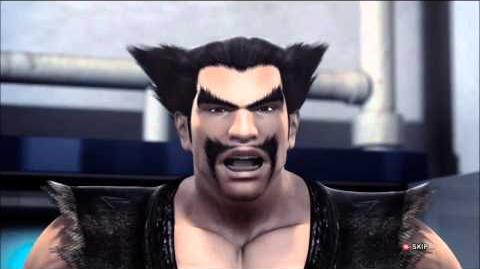 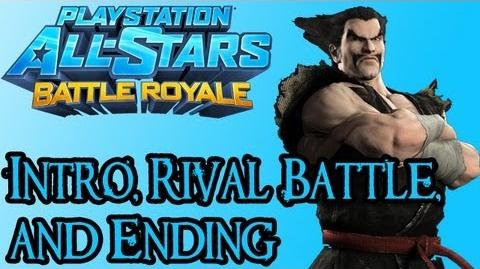 Retrieved from "https://villains.fandom.com/wiki/Heihachi_Mishima?oldid=1003742"
Community content is available under CC-BY-SA unless otherwise noted.