Member of the Irene Squad

Heine Lunasea is an antagonist in Fairy Tail. She is a member of the Alvarez Empire and a soldier as well as a top enforcer of the Irene-Squad. As it turns out, she's a actually a sword which was turned into a living human form.

She is voiced by Manami Hanawa in the Japanese and by Ariel Graham in the English version of the anime.

Heine has the appearance of a black haired young woman (blue haired in the anime), who wears a blue (black in the anime) headband, a skin tight suit and a cape.

She appears with Juliet and Irene on a mountain and stays there when Bradman and Larcade take the Sabertooth and Blue Pegasus members out. Later Heine along with Juliet leave the mountain to help the other two Spriggan 12 members. After Irene casts Universe One, Juliet and Heine take out some Fairy Tail members and try to kill Mirajane. They manage to overpower Mirajane's Satan Soul, but are defeated by her strongest form Mirajane Alegria. After they are defeated they turn back to their sword form. 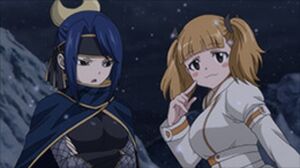 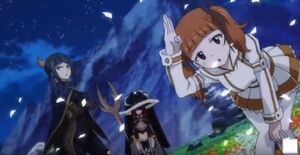 Irene Squad in the opening. 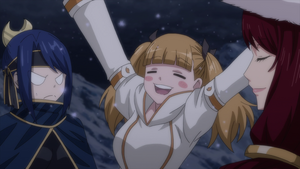 Heine angered about Juliet saying she wants to be "the black angel".