Heinrich Himmler was one of Nazi Germany's most powerful and notorious figures, often cited as the mastermind of the Holocaust. As such a reviled Nazi, he has appeared in numerous fiction, Marvel Comics being no exception.

In February 1934, Himmler was at the Deutsches Operhaus in Berlin. With him were Adolf Hitler and Ernst Kaufmann, head of the Sturmabteilung's (SA) Special Weapons Division. There, he met Johann Schmidt, the German physicist who revealed them his theory that Norse gods and their magic could be more than myth. Hitler was intrigued by Schmidt's ideas, but Kaufmann was less impressed. However, Himmler saw some value in what Schmidt had to offer and befriended him. Later, during the "Night Of The Long Knives", Himmler allowed Schmidt to personally kill Kaufmann.

In October 1941, Himmler was approached by a fanatical biologist who feared that he could not prove the inferiority of "inferior" races once they had been exterminated by the Nazis and wished to have 100 specimens from Auschwitz killed and then have their organs and skeletons preserved, Himmler approved of the atrocity and made arrangements for the biologist to enter the camp and pick his "specimens".

Later, Himmler would order the destruction of a movie that showed many of the atrocities in the death camps, using Von Bacht to do so. While successful in destroying the movie, Von Bacht was ultimately captured by the Human Torch android and revealed that his orders came from Himmler directly. 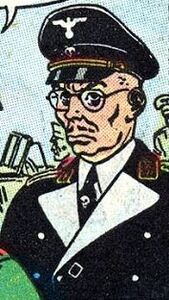 Add a photo to this gallery
Retrieved from "https://villains.fandom.com/wiki/Heinrich_Himmler_(Marvel)?oldid=3702834"
Community content is available under CC-BY-SA unless otherwise noted.