Kill both Thor and Odin.

Destroy Asgard and to seek revenge on Odin and his people for rejecting and banishing her.
Conquer the Nine Realms.
Stop Pluto from claiming Odin's soul (succeeded).
Aid Loki in starting Ragnarok (failed)

Hela is the Asgardian goddess of death in the Marvel Comics universe and an enemy of Thor. She is the daughter of the Asgardian god of mischief Loki and a Frost Giantess with magical powers named Angerboda, and was set by Odin at her birth to rule Hel and Niffleheim, the Asgardian afterlife regions.

She is based on the ancient Norse goddess of the same name.

She was created by the late Stan Lee and the late Jack Kirby, and first appeared in Journey into Mystery #102 in March 1964.

Hela reveled in her rule, and always sought Asgardian souls to take to her realm, especially the souls of Odin and Thor. She created many plots to do so, once taking control of Valhalla, the Asgardian Heaven, for a short time. She once sent her armies of undead beings and spirits to conquer Asgard, during which the former Asgardian villain Skurge the Executioner, sacrificed himself to stop the enemy's progress at the Bifrost Bridge.

Another scheme involved her casting a curse on Thor, making him unable to heal wounds, but also unable to die. After many battles and suffering, Thor finally was destroyed by the Jormungandr, and entered Niffleheim in the Destroyer armor. The armor's mystic power was too much for Hela, however, and she lifted Thor's curse and sent him back to Asgard.

Hela has often dabbled in the realm of mortals, manipulating and killing them as she pleased. She has often helped her father Loki in his many evil schemes. Hela was part of a meeting of supernatural demon/death rulers including Mephisto, Blackheart, Dormammu, and Satannish, who met to consort about the mystical mutant Magick finding the soulsword.

Hela is supposedly the daughter of Loki, the God of Mischief, and Angerboda, a sorcerers giantess. The Norns, the three Asgardian goddesses of fate, are said to have warned the Gods that Hela would prove to be a great danger to them. Odin decreed that Hela would become goddess and ruler of the spirits of the dead, once she had reached maturity. Despite Hela ruling Hel, Odin himself directly ruled the souls of Asgardians and their human worshippers who died on the battlefield as heroes, and had the palace of Valhalla built.

During the Second World War, the Nazis succeeded in controlling Hela's mind, forcing her to do their biding. She was forced to fight the Invaders, a team lead by Captain America to aid the Allies and defeat Master Man, and she was eventually freed her this control.

Hela had sought to bring more Asgardian souls under her control, and longed to possess the souls Odin, and his son, Thor. During their first meeting, however, Hela was impressed by Thor's nobility when he offered his life in exchange for Sif. Hela let both Thor, and Sif, who was her prisoner, go, showing her honorable side.

When Harokin died, the Asgardians prepared his body to be collected by the Stallion of Doom, and awaited the arrival of Hela to escort him off to Valhalla. When Thor appeared to have been killed by Wrecker, his body was visited by Hela, who had come to claim his soul. However, Thor's still living body projected an astral image that stayed her hand. She failed to claim his soul because of this, as he reclaimed his body to defeat the Wrecker.

When Sif was injured in battle, she and Thor were visited by Hela who had come to take Sif to Valhalla. When Thor refused to allow Hela to take his lover, Hela attempted to entice Thor into joining the warriors of the dead in Valhalla. He refused even when hew as beckoned by Harokin to join them, and Hela departed upon his refusal.

Later on, Hela stole a piece of Odin's soul while he was on the Sea of Eternal Night, and the powerful entity called Infinity was created. Hela unleashed the entity upon the Nine Realms, and the goddess of death succeeded in killing Thor. He was restored to life by the sacrifice to the Silent One, and Hela was slain by Odin to save his son. Despite this, Hela was restored to life, as there needed to be a natural balance of life and death. Hela later managed to Kill Thor, but she revived him after Sif offered to die in his place.

After Odin was slain by Mangog, Hela and the Olympian God Pluto battled for the right to claim his soul. However, Hela decided to restore Odin to life to stop Pluto from claiming him, and he was thwarted. Hela met Thor again when he travelled to Nifflheim in search of Odin, only to be confronted by the legions of the Einherjar, and that he was reaching out to Grombar. Hela let Thor leave without being harmed from her realm, and he continued his search.

Hela worked with Loki to begin Ragnarok, the Asgardian apocalypse by killing Balder and then attacking Asgard. Hela summoned Volla's spirit to advise them on how to start Ragnarok, after which she sent a horde of monsters to attack Asgard. The plan was thwarted when Odin was able to use his power to save Balder's life.

Hela's true form is a shriveled, half-dead being, but her cloak revives her and gives her full power. Hela has great magical power over life and death, and can drain the life from anyone she touches, as well as age them quickly with mystic bolts. She is extremely powerful in physical, mental, and magical combat, able to go toe-to-toe with Thor. Her physiology is that of an Asgardian, granting her superhuman strength, speed, durability, and stamina. She is a master at manipulating magic, and can use it to levitate, time-travel, use astral projection, and create illusions, among other powers. She is also an accomplished swordswoman, using her blade "Nightsword". 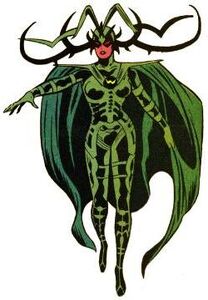 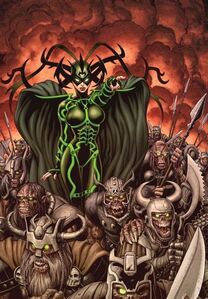 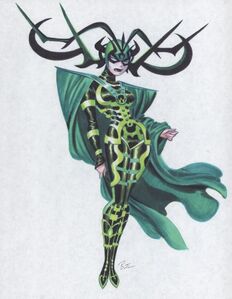 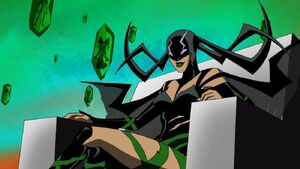 Hela sitting on her throne within Helheim in The Avengers: Earth's Mightiest Heroes. 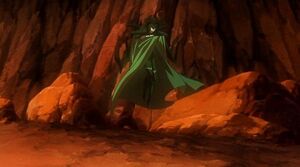 Hela in Hulk Vs. Thor. 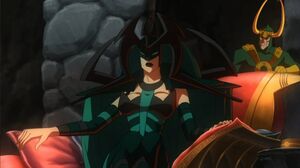 Hela and her father Loki in Hulk Vs. Thor. 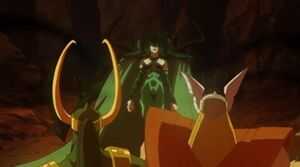 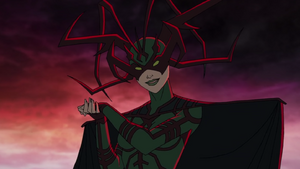 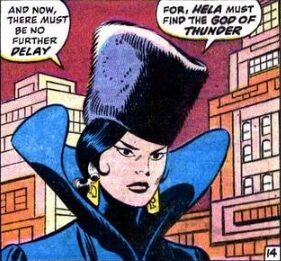 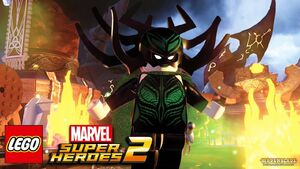 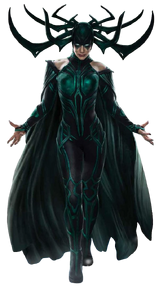 Hela in the Marvel Cinematic Universe. 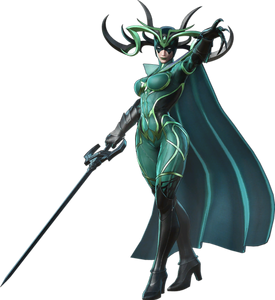 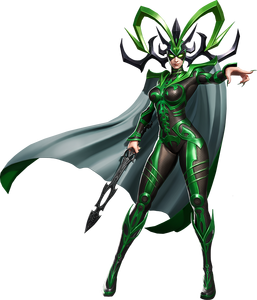 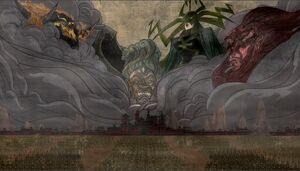 Hela as one of the 'Deities of Death' in the alternate opening to The Invincible Iron Man.