Managing her reign over Helheim.

To aid her father Loki in defeating the Gods of Asgard (eventually succeeded)
Make Odin bring her to Helheim and make her its guardian in order to finally stay alone.
Maintain her rule over Helheim.
Keep haunting the souls of the dishonored and the unworthy (all succeeded).

Hel (also known as Hela), also referred to as the "Two-Faced Terror", is an ancient goddess of the dead within the Norse mythology who presides over the realm Niflheim within the place of the same name which serves a basis for the Christian concept of Hell, where she receives a portion of the dead. She is quite usually described as a horrible hag, half dead and half alive, with a gloomy and grim expression. Her face and body are those of a living woman, but her thighs and legs are of a corpse, mottled and moldering.

It is said that once the gods found that these three children are being brought up in the land of Jötunheimr, and when the gods "traced prophecies that from these siblings great mischief and disaster would arise for them" then the gods expected a lot of trouble from the three children, partially due to the nature of the mother of the children, yet worse so due to the nature of their father.

After this discovery, the viking god Odin of Asgard sent the gods to gather the children and bring them to him. Upon their arrival, Odin threw Jörmungandr into "that deep sea that lies round all lands, " whereas Fenrir remained in Asgard under the Gods' care and Hela assigned to rule Helheim, the realm of the dead she held dominion over, citing that she must "administer board and lodging to those sent to her, and that is those who die of sickness or old age." While it can be inferred the motive behind her assignment there being to ensure that her dark powers would be used for her fitting role, Hela nonetheless contented with her newfound position.

After the death of Baldr at the hands of Loki, the goddess Frigg asks who among the Aesir will earn "all her love and favor" by riding to Hel, the location, to try to find Baldr, and offer Hel herself a ransom. The god Hermodr volunteers and sets off upon the eight-legged horse Sleipnir to Hel. Hermodr arrives in Hel's hall, finds his brother Baldr there, and stays the night. The next morning, Hermodr begs Hel to allow Baldr to ride home with him, and tells her about the great weeping the Aesir have done upon Baldr's death. Hel says the love people have for Baldr that Hermodr has claimed must be tested. This test being that if all the things in this world, living or dead, mourn for Baldrr then he will return to the land of the living. If one refuses, then he will remain in her domain. All beings except one named Þökk weeped over his death, not only resulting Baldr to stay in Helheim, but also alarmed the Gods about Loki's betrayal.

Hel is attested in the Poetic Edda, compiled in the 13th century from earlier traditional sources, and the Prose Edda, written in the 13th century by Snorri Sturluson. In addition, she is mentioned in poems recorded in Heimskringla and Egils saga that date from the 9th and 10th century respectively. An episode in the Latin work Gesta Danorum, written in the 12th century by Saxo Grammaticus, is generally considered to refer to Hel, and Hel may appear on various Migration Period bracteates.

In the Poetic Edda, Prose Edda, and Heimskringla, Hel is referred to as a daughter of both the divine trickster Loki and the immortal giantess Angrboda (his first wife), and to "go to Hel" is to die. In the Prose Edda book Gylfaginning, Hel is described as having been appointed by Odin as ruler of a realm of the same name, located in Niflheim. In the same source, her appearance is described as half-black and half-flesh coloured and as further having a gloomy, down-cast appearance. The Prose Edda details that Hel rules over vast mansions, her servants in her underworld realm, and as playing a key role in the attempted resurrection of the god Baldr. She cares for the ones that have died of age or sickness and sends "wolfish murderers," "men who seduce another's faithful wife," and oath-breakers to Nástrand where the lindworm Nidhögg dwells.

Scholarly theories have been proposed about Hel's potential connections to figures appearing in the 11th century Old English Gospel of Nicodemus and Old Norse Bartholomeus saga postola, potential Indo-European parallels to other deities that reigns over the dead such as Bhavani, Kali, and Mahakali, and her origins.

Hel is a female jötunn whose appearance could scare the lookers off. She is beautiful on one side yet decayed on the other (the decayed half is not necessary rotting and zombie-like however, as some argued it merely corpse-like in color). Thought her distinct appearance unnerved even stout-hearted heroes and Gods alike, the dead admired her by contrast.

She is sometimes accompanied by skeletal hound Garm who also acts as the guard of the Gate of Helheim and the mortal enemy of Tyr in Ragnarök.

Hel is arguably the least malevolent of three siblings, simply cold and detached rather than evil like her portrayals in popular culture. Despite her animosity towards Gods of Asgard for both casting her into Helheim at which she allowed to have dominion over, Hel nonetheless accepted her role as the ruler of her namesake realm. She is grim and fierce, merciless in destroying those who offend her. Hel rarely conveys emotion, except for the occasional mocking smile.

Hel appeared to hold resentment towards her father Loki for being born as half-undead Jötunn, yet the fact that she did nothing to prevent Naglfar, a supernatural Viking longship said to be made of nails of the deceased, from being seized by a horde of dishonorable dead in a bid to assist his Jötnar army against the Gods during Ragnarök indicated her willingness to put it aside for assisting the latter and her siblings Jörmungandr and Fenrir in their war, something which motivated by their common desire to avenge their progenitor Ymir. This in turn, confirmed her dangerous nature as Odin and his fellow Norse deities feared.

Undead Jötunn Physiology: Hela is the half-dead Jötunn and daughter of Angrboða and Loki who born with immense death-related powers which complimented her role as the ruler of Helheim appointed by Odin the Allfather himself.

With her major role in Norse mythology, Hela has been used in countless works of fiction. Notable examples are: 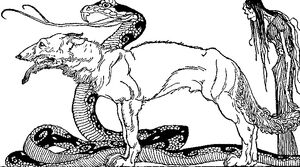 Artwork of Hela with her siblings, Jormungandr and Fenrir by Willy Pogany. 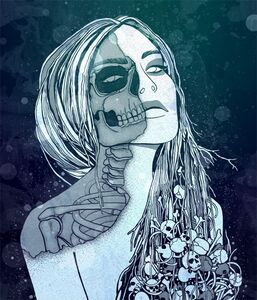 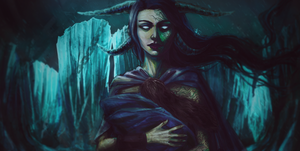 Artwork of Hela by Lesluv. 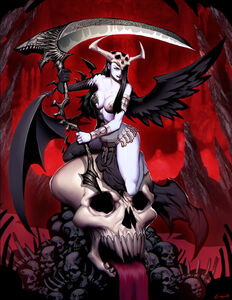 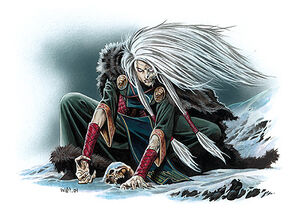 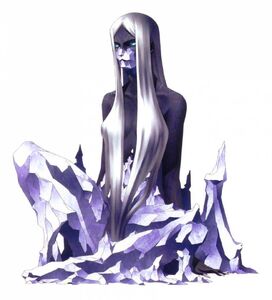