Defeat the Order of Heroes

Helbindi is a minor antagonist in Fire Emblem Heroes, being one of the three secondary antagonists in Book II. A minion of the tyrannical Surtr, Helbindi is the only one of his right-hand men to not be related to him, and the only man among them.

He is voiced by Kazuya Nakai in Japanese and Raymond K. Essel in English.

Helbindi is a dark-skinned man with short white hair and red eyes. In his normal attire, he is shirtless and wears golden gauntlets, boots, a headband with a horn and a green cloak. In his Summer attire, he wears a pair of black swim trunks.

In his normal attire, his weapon of choice is an axe, while his summer variant can strike with a shovel.

Helbindi rose up from the bowels of the streets to become a general in the army of Múspell due to his battle prowess. He first fights the heroes in the start of Chapter 9, but is beaten and drove back to the Fortress of Cinders, where he helps a captured Ylgr not starve herself. He later appears at the end of the chapter, trying to transport her elsewhere in hopes she or his sister isn't harmed. Defeated again after another fight, Helbindi leaves, saying that Menja, his sister, needs his aid.

He later appears at Chapter 11, forced to take Laegjarn and Laevatein alongside him into battle, warned his failure could spell death or enslavement. He tries both in Part 2 and 3 to defeat the heroes, but is unsuccessful.

After being defeated once more in Chapter 12, he is informed that his failure brought the wrath of Surtr upon his village, killing all in it, including his sister. At his end with helping the fiend, Helbindi makes his final appearance in Chapter 13, helping Ygir and Princess Veronica escape their captivity and upcoming sacrifice before fighting Surtr himself, likely dying to his former master. 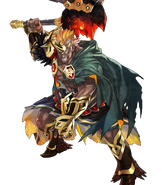 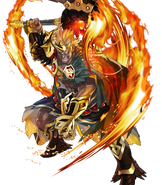 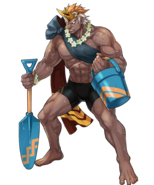 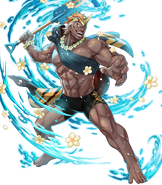 Retrieved from "https://villains.fandom.com/wiki/Helbindi?oldid=3858249"
Community content is available under CC-BY-SA unless otherwise noted.