Head of the SS Paranormal Division

Leadership
Knowledge of history and the occult

Obersturmbannführer (Lieutenant Colonel) Helga von Schabbs is the head of the SS Paranormal Division and the main antagonist of Wolfenstein: The Old Blood.

She was voiced by Gabrielle Scharnitzky.

Helga is a descendant of Otto I, the first German monarch. At a young age she was infected with polio which caused her leg to be crippled, resulting in her having to wear a leg brace later in life. It was during this time that she developed an interest in history and began studying archaeology as well as the occult.

During her youth, her father took her to National Museum of History in Berlin and told him it felt like she was touching history. However, he would commit suicide by hanging, and she would find him, traumatizing her.

As an adult, Helga used her family's wealth to travel the globe excavating tombs for their artifacts. She was eventually recruited by General Wilhelm Strasse into the SS Paranormal Division.

Helga von Schabbs headed a project to unearth the ancient secret of Otto I, which turns out to be a monstrous flesh golem. Upon discovering it, Helga, believing she is in control of the beast, orders it to eat B.J. Blascowitz. However, the monster instead mauls Helga and tosses her across the room. After the monster is killed by B.J., B.J. walks up to her to find she is still barely alive. Helga states she lost control of the monster but B.J. tells her she never was in control before she dies. 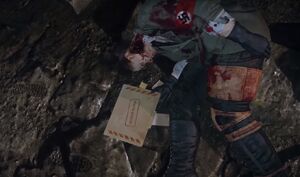