Control over his servants

Asserting his control over his dancers.

Lusting over Primrose.
Abusing his dancers when they fail to meet his standards.

Keep Primrose to himself (failed).

Helgenish is a minor antagonist in Octopath Traveler, being the first villain and boss Primrose faces. He is a fat and rather ugly man who uses a group of dancers to make money for him, dancing and entertaining people.

A brutish figure, Helgenish oversees a group of dancers, who dance to make money. These dancers aren't well treated, as he often berates and physically abuses them (the latter being at least for Primrose). If any of his dancers fail to meet his standards, they are beaten severely and tossed out into the streets. At least for Primrose, Helgenish idolizes and acts quite perverted to her, calling her "kitten" at times and has her entertain him by herself. He has ties to Rufus, who gives him a regular stream of the enslaved woman to use as dancers.

Eight years before the events of the game, Primrose starts working for Helgenish in hope that under him, she could find the men who murdered her father.

For a dance he finds rather inferior to his standards, he has her go out to the streets to find people for her to entertain for money. However, Primrose finds Rufus nearby, and with the help of Yusufa covering for her, she goes out to track him down. However, Helgenish finds out about Primrose's escape, and for it, he tortures Yusufa, and later stabs her in front of Primrose before tossing her down a cliff-face, mocking her last words after her death. Primrose fights and defeats Helgenish and wins, and Helgenish meets his end in a failed attempt to attack Primrose when her guard is down, being rewarded with a slit throat.

Helgenish is a rather fat, balding man with brown hair and mustache. He wears a Napoleon-era like a jacket, a ruffled collar, white pants, and boots. 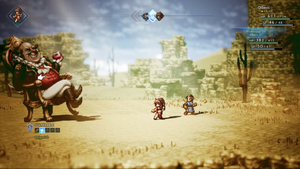 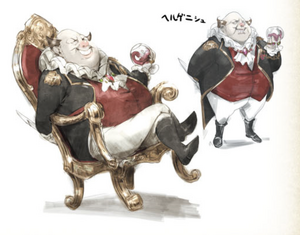 Retrieved from "https://villains.fandom.com/wiki/Helgenish?oldid=3706593"
Community content is available under CC-BY-SA unless otherwise noted.