Hellhound (All Dogs Go to Heaven)

The Hellhound is a minor antagonist who appears in the 1989 Don Bluth film All Dogs Go to Heaven. He is strongly implied to be the canine equivalent of Satan himself.

The Hellhound takes the form of a giant brown dog-like demon with glowing yellow eyes and a gray snout that can breathe fire to create imps.

About halfway through the movie, Charlie has a nightmare in which he is condemned to Hell after he was chastised by Anne-Marie for stealing the wallet from the couple from the horse track.

While entering Hell, Charlie was sucked into the hole to Hell below. The Hellhound makes his entrance and (in the extended scene, he leans closer to Charlie, claiming him to be his.). Charlie is then attacked by the Hellhound and several vicious imps (slaves of the Devil) before waking up from his nightmare.

The creature then appears toward the end of the film to take Charlie's soul to Hell for judgment but is defeated when Annabelle, the angelic pink whippet, appears in a glowing blue orb of mystical energy, past through the beast who dissolves into nothingness upon contact as she arrives to take Charlie to Heaven instead as he has done a heroic act for once in his life. 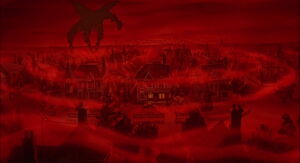 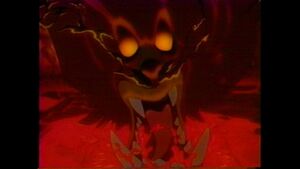 The Hellhound in an extended footage. 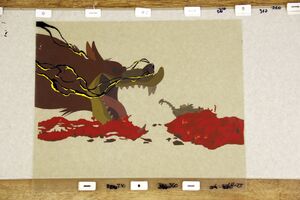