The Hellions are a villainous street-gang from City of Heroes. They are a gang of street thugs with an anarchistic outlook and possibly supernatural abilities.

At the initial glance they appear to be typical malefactors engaging in anarchic lifestyles - however on closer inspection the Hellions are revealed to be a much more troubling entity: namely demon-worshipers. High-ranking Hellions have even managed to gain demonic abilities via embracing the darkness (the nature of the dark forces that empower the Hellions is debatable, but Paragon Police and agents of MAGI have documented many reports of gang members gaining supernatural abilities) and the gang are often seen committing arson: in fact setting fires seems to be a major part of being a Hellion and they enjoy seeing things burn (which suggests that as well as being demon-worshipers many of them are also pyromaniacs). The Hellions have their biggest chapters of membership residing in Atlas Park, Galaxy City, and Perez Park. Atlas and Galaxy swarm with them.

As members rise in the ranks, they are exposed to a quasi-religious dogma, where power is achieved through crimes, or acts of sin. In the Hellions’ worldview, fear, greed, lust, and anger are powers to be tapped into. They openly claim to “worship the devil,” and brandish Satanic images like a blunt hammer, but few realize that their leaders are deadly serious in their beliefs. Members maintain a strict code of secrecy and solidarity, even under police interrogation, and the gang leaders – the Fallen and the Damned – take their secrets to the grave. Members fight for power amongst themselves, to establish their status in the gang’s hierarchy. The lower rungs of the Hellions’ leadership is ever changing, as more ambitious climbers struggle to prove their ability.

The gang itself exists mainly due to backing from the high-end black-marketeers known as The Warriors. The Warriors steal artifacts from museums and even dig sites to either sell to high-end, usually criminal, collectors or keep them for themselves. As many of these artifacts are of an enchanted/cursed nature, The Warriors attracted the attention of The Hellions. Initial conflicts resulted in The Warriors holding a clear advantage over the Hellions, magic or no magic.

But thanks to the negotiations of a Mystery Benefactor, the two gangs soon set-up a sponsor-sponsored relationship. The Warriors sell what they can not move to their higher-end clients to the Hellions instead. Additionally, The Warriors are willing to lose whole warehouses to the Hellions in order to wash their hands of evidence when the police start getting close.

All a Warrior needs to do is call a known Hellion contact tell them where their warehouse is and let nature take it's course, the entire shipment will be pillaged or burned by the anarchistic thugs but that also means the police when arriving will not be able to establish what the owners did and didn't have there thanks to the raid. The Hellions know they are being used by the Warriors, but with potential gate-way artifacts to unlock their powers, high-end backers and the occasional open invitation from said backers to raid their own wares, the Hellions have found it most beneficial to work under them.

Hellions also regularly engage in fights with rival street-gangs such as the Skulls and are one of the more numerous and easily defeated opponents a low-level hero or villain will face, though their leaders can be more of a challenge. The Skulls are thugs that mirror the Hellions in structure as they regularly work for the Marcone Crime Family, just as the Hellions do for The Warriors.

The Warriors and The Family, largely have no issues with each-other specifically but the feuding of their supplicants has lead both sides to occasionally swoop in and settle matters for their pawns. The feud, in addition to basic malcontents is mainly over territory as there are only so many low-security areas in Paragon City that one can reasonably do criminal-business in without having heroes leap in at any moment, making such territories a precious commodity and leading the Hellions and Skulls into an ever escalating turf-war. 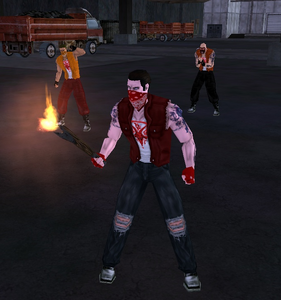 The Hellions
Add a photo to this gallery
Retrieved from "https://villains.fandom.com/wiki/Hellions?oldid=3803892"
Community content is available under CC-BY-SA unless otherwise noted.