The Hellspawn (also called "Hellspawns") are undead entities that are capable of manipulating fire and one of the known hostile species in the Mortal Kombat universe. Scorpion is the most well-known Hellspawn.

The Hellspawn possesses some abilities similar to the powers of the Wraiths including fire manipulation.

Scorpion's entire beloved ninja clan, the Shirai Ryu, were resurrected by the Elder Gods as payment for him aiding them against the ancient Outworld emperor Onaga. However, they betrayed him by resurrecting the clan as undead Hellspawns similar to Scorpion, causing Scorpion to turn his back on everything Elder Gods stand for, and join Forces of Darkness (this is when Scorpion discards his neutral alignment and truly turns evil).

The Hellspawn were dispatched by Scorpion to battle against Taven in order to prevent him from stopping Armageddon in his vengeance and retaliation against the very gods who betrayed him.

Hellspawns generally come in groups; while they are easy to defeat alone, they can be difficult in numbers.

Hellspawns are actually first seen when Scorpion performs his Annihilation fatality in Ultimate Mortal Kombt 3: He goes into his victory pose as the ground begins to shake violently. Moments later, he and his defeated opponent are automatically transported to Scorpion's Lair where numerous fallen Shirai Ryu clan members rise from the ground to utterly destroy the opponent. The Fatality is presumed to be brutal enough to fade to black as the opponent is beaten before a splat and an intense scream is heard. 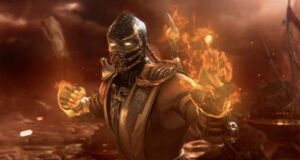 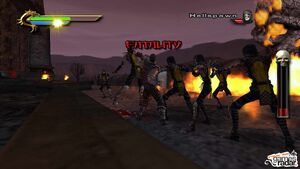 Taven fights these Shirai Ryu ninjas that are now reborn as the Hellspawn in Mortal Kombat: Armageddon. 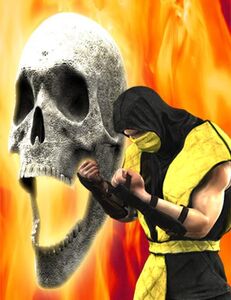 Retrieved from "https://villains.fandom.com/wiki/Hellspawn_(Mortal_Kombat)?oldid=4329944"
Community content is available under CC-BY-SA unless otherwise noted.