Helm is a major antagonist in the 1990 film Total Recall. He is Richter's right-hand man and the lieutenant of the Vilos Cohaagen's Mars Colony Security Force.

He was portrayed by Michael Champion.

Helm was first seen with Ritcher as they chase down Douglas Quaid following the latter's visit in Rekall, which resulted a memory cap that almost blew his cover. Through a electromagnetic chip implanted inside Quaid's skull, Helm was able to pinpoint Quaid's location on Earth, even after Quaid killed off Harry and his men and fighting off Lori before escaping. As the chase continues, it turns out that Ritcher wants Quaid dead for making out with an undercover Lori (who turns out to be Ritcher's wife), to which Helm assures that Lori hated every minute of it.

As the chase goes on, Quaid soon learns about this past identity as Carl Hauser, as agent working for Mars secret intelligence, and that Cohaagen had his memory erased for a conspiracy plot. To ensure that Ritcher and his men do not follow him, Quaid uses a device and shoves it up his nose to remove the tracking device his skull before escaping to Mars, which left both Richter and Helm very upset.

Heading back to Mars along with Lori and their men, Richter and Helm wait and Lori sets her trap on Quaid following the death of Dr. Edgemar. However, resistance fighter Melina arrives to the rescue by killing off Lori's men before Quaid kills Lori. Upon seeing Lori's death, Richter grew vengeful and orders Helm and his men to take down Quaid. Helm was able to get a clear shot at an escaping Quaid and Melina, but he refrains himself from shooting them as they are too close to the glass dome sealing off Mars' toxic atmosphere. Helm even stopped a vengeful Richter from shooting down Quaid and Melina, angrily warning him that the dome will crack if he misses and everyone in the colony will die as a result.

As Quaid and Melina drive off with a taxi driver named Benny, Richter and Helm chase them down to the local red district Venusville, where the trio hides off in the underground tunnels. As they investigate a bar known as "The Last Resort", Ritcher orders Helm and their men to kill the attendants when they refuse to give out Quaid's location. This resulted a fight between Richter's men and the attendants, and Helm is killed when a midget woman named "Thumbelina" rams up a knife on his crotch. Eventually, Everett delivers Cohaagen's message to Ritcher, as Cohaagen orders for Venusville to be sealed off of its oxygen supply.

Quaid eventually learns that Helm was involved in a plot formulated by Cohaagen regarding to an alien reactor that can create a breathable atmosphere for Mars, and that Cohaagen plans to destroy the reactor and finish off the rebels to continue his abusive monopoly of selling oxygen and maintain his power over the colonies. 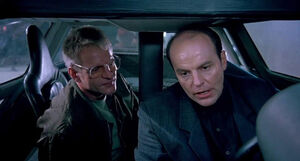