NOTE: This article is about the incarnation of Baron Zemo from the Marvel Cinematic film series. The mainstream version can be found here: Baron Zemo II.

Taking care of his family (before their deaths, formerly).

Tear apart the Avengers team by turning them against each other in order to gain revenge upon them for his family's loss at the Battle of Sokovia (succeeded in the short term; failed in the long term).

Helmut Zemo, often using the alias Herr Müller, is a recurring antagonist in the Marvel Cinematic Universe, serving as the main antagonist of the 2016 Marvel film Captain America: Civil War, as a cameo antagonist in the 2018 film Black Panther, and will return in the upcoming 2020 Disney+ series The Falcon & the Winter Soldier.

He is a former soldier-turned-terrorist mastermind who is bent on destroying the Avengers to avenge his family's demise. As he knew that he would not be able to battle them head-on, he devised a scheme to manipulate the Avengers into fighting and defeating each other.

He was portrayed by Daniel Brühl, who also played Fredrick Zoller in Inglorious Basterds.

Helmut Zemo was born on June 16, 1978, in Novi Grad, the capital city of Sokovia. He is a former official in the Sokovian Armed Forces and in an elite military unit EKO Scorpion, who lived a happy life with his father, wife, and son in Sokovia. Unfortunately, his happiness was cut short when the evil android Ultron and his army of sentinels destroyed Sokovia, which tragically cost the lives of Zemo's family. Though Ultron and his army were defeated and destroyed by the Avengers, Zemo angrily blames the Avengers for causing his family's demise (since they were the ones responsible for the creation of Ultron, despite the fact that they have no malicious intentions of doing so), and vowed to destroy the team at all costs.

However, Zemo knew that he would not be able to fight them personally as people more powerful than he had tried that and failed, so he devised a plan to corrupt the Avengers into turning against each other. After Black Widow released multiple encrypted HYDRA files following the death of Alexander Pierce and the fall of S.H.I.E.L.D. and HYDRA, Zemo spent all his time trying to decode them. He eventually learned about a secret facility in Russia which HYDRA created the Winter Soldier and how they used trigger words which would ensure his complete obedience. From the files that Black Widow released, Zemo found out where the leader of the Winter Soldier facility lived.

At the beginning of the movie following the deaths of Crossbones and several of his mercenaries, Zemo drives to the home of the former HYDRA agent Vasily Karpov, deliberately crashing his own car into Karpov's car. Acting as if it was an accident, Zemo rings at Karpov's door claiming that he wants to peacefully settle the matter. However, once Karpov opens the door, Zemo knocks him out and hangs him upside down over a sink which slowly fills with water. While the water rises, Zemo smashes a wall in the agent's house in with a sledgehammer. In a secret storage, he finds a book which contains the trigger words to activate the Winter Soldier. With the book, he returns to the HYDRA agent and asks for the location of the facility. However, Karpov refuses to talk and ends up being drowned to death by Zemo.

As the next step of his master plan, Zemo bombs the UN meeting in Vienna, resulting in the deaths of the Wakadan king T'Chaka and several others. He then proceeds to frame the Winter Soldier Bucky Barnes for the bombing, causing T'Chaka's son Prince T'Challa (the Black Panther) to personally hunt down Bucky to avenge his father's death. This was coincided when the signing was put into place for the Sokovia Accords, a framework that would place the Avengers under government oversight, causing a friction between two factions of the Avengers; one led by Steve Rogers against the accords, and the other led by Tony Stark supporting the accords.

Barnes, as well as Rogers and Sam Wilson, are arrested by a special task force and brought to a Secret Service Office in Berlin, in accordance to Zemo's plans. Zemo, who had previously killed a psychiatrist who was supposed to make a psychiatric evaluation on Barnes, takes the man's place and triggers Barnes with the HYDRA keywords. Barnes is forced to reveal to Zemo the location of the HYDRA base, which is located in Siberia. To escape the building, Zemo sets up an E.M.P. bomb near the relay power station, causing a power outage in Berlin that allows Zemo to release Barnes, who attacks Rogers and Wilson while Zemo escapes heading to Siberia.

Rogers eventually manages to free Barnes from the trigger word's influence, but Zemo has already escaped and headed for Siberia, revealing that the HYDRA base contains five more Winter Soldiers. Following the battle between two factions of the Avengers (one led by Rogers and the other led by Stark), Natasha Romanoff learns of the truth that Zemo was the true culprit behind the bombings and lets Rogers and Barnes escape to Siberia. She then informs Stark, who heads over to Siberia with Rogers and Barnes after striking a truce while the rest of Rogers' team is apprehended and confined in an underwater prison called the Raft run by the U.S. Secretary of State Thunderbolt Ross.

At the HYDRA base in Siberia, Zemo has located the facility and found the five other Winter Soldiers who are still in cryo-sleep. Barnes, Rogers, and Stark arrive as well, believing that Zemo intends to unleash the Winter Soldiers on the world. However, they are surprised to see that Zemo had killed all the Winter Soldiers. Zemo, who has bunkered himself in a safe room, confesses that his intent to use the Winter Soldiers and the Vienna bombings were nothing but ruses to lure the Avengers to turn against each other in revenge for his family's demise. He proceeds to enact the final part of his plan by playing exclusive security footage of Stark's parents being murdered by Barnes when he was being brainwashed by HYDRA in 1991. Enraged that Rogers kept this from him, Stark turns on Barnes, forcing Rogers to fight him to save his friend's life. The battle ends in a stalemate with Rogers disabling Stark's armor after Stark blasts off Barnes' robotic arm. Following the aftermath of the battle, Rogers escapes with Barnes, leaving his shield (which was made by Stark's late father) behind, accepting that he no longer deserves it.

Witnessing the beginning of the battle and satisfied by the outcome, Zemo heads to the surface, where he is confronted by T'Challa, who has followed the trio behind the shadows and now knows the truth behind his father's death. However, having learned about Zemo's loss of his family and seeing what the pursuit of vengeance has turned him into, T'Challa decides to spare Zemo, who apologizes for killing T'Chaka, assuring it was nothing personal against him. After deleting the last voicemail of his late wife from his phone, Zemo declares his work to be done and prepares to commit suicide to join his dead family by shooting himself in the head with a pistol. However, T'Challa stops him from doing so, explaining that the living isn't done with him yet. T'Challa delivers him to the U.S. government agent Everett Ross, who arrests Zemo for his crimes.

In the end, Zemo is incarcerated in a prison in Berlin as punishment for his crimes against the Avengers. Despite his imprisonment, Zemo reminds Ross that he still has succeeded in his plan to tear apart the Avengers, as many of the members (including Rogers) are now in total disarray and left the team in shame, something which Ross realized in horror. Although the dismantling of the Avengers was seemingly permanent, Stark was able to get over the fact that what happened to his parents wasn't Barnes' fault as he received an apology letter from Rogers, who promises that the team will reunite when the time to act occurs the most. Understanding the point, Stark deliberately allows Rogers to free his captive team from the Raft, assuring that he will be there when they need him the most.

Zemo is only seen in a picture during a news report detailing the death of T'Chaka, an event watched by T'Challa as he is returning back to Wakanda to be crowned as the new King. This event led T'Challa to develop an insecurity about being a true king of Wakanda, though he overcomes it after foiling Erik Killmonger's plan to sell vibranium weapons throughout the world.

Zemo was a vengeful man filled with anger and hate towards the Avengers because of their battle against Ultron in Sokovia that tragically cost the lives of his family. As such, he was determined to make them suffer to bring "justice" for his family's demise. He was also proven to be extremely intelligent, as he knew first-hand that he couldn't defeat the Avengers by force and instead relied on a strategy to tear them apart on the inside.

Despite his relentless attempts to destroy the Avengers, Zemo's humanity was not entirely lost. This was shown when he interrogated the HYDRA agent, he said he would have to use violent means to get him to speak, even though he doesn't approve in doing this. He even sincerely apologized to T'Challa for killing his father by opening up his tragedy, which made T'Challa (who previously desired to kill Zemo to avenge his father) realize the desire of vengeance has consumed Zemo for the worst. As such, T'Challa decides to spare Zemo, not wanting to stoop to his level.

In the end, after succeeding in his goal, Zemo attempted to commit suicide as he feels that he has nothing else to live for, though T'Challa stopped him and turned him over to the authorities. 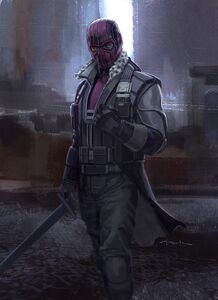 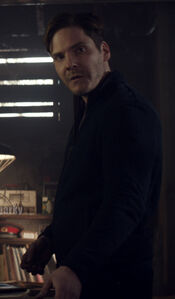 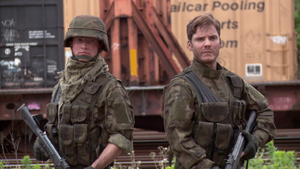 Zemo back when he was a soldier of EKO Scorpion.

Zemo finds and tricks Vasily by crashing his car.

Zemo drowns Vasily Karpov after the latter refuses to talk.

Zemo heads over to Siberia by using the Winter Soldier's rampage to cover his tracks.

Zemo using the book to activate the Winter Soldier.

Zemo uses the trigger words to activate the Winter Soldier and free him.

Zemo reveals his true plans to dismantle the Avengers in revenge for his family's demise.

Zemo explains his family tragedy to Black Panther, even apologizing for killing his father.

Zemo attempts to commit suicide after accomplishing his goal to dismantle the Avengers, only to be stopped by Black Panther.

Zemo ends up being restrained by Black Panther, who tells him that he needs to be brought to justice first.

Zemo is currently imprisoned for his crimes against the Avengers.
Add a photo to this gallery

Retrieved from "https://villains.fandom.com/wiki/Helmut_Zemo_(Marvel_Cinematic_Universe)?oldid=3283180"
Community content is available under CC-BY-SA unless otherwise noted.