Get himself a chicken to eat.

Henery Hawk, also spelled as Henry Hawk, is a recurring antagonist from the Looney Tunes franchise, appearing as one of the main antagonists in Foghorn Leghorn shorts.

He is a young chicken hawk that seeks to prove himself as an accomplished predator (usually to his father) by catching and killing a chicken, despite being frequently confused as to what a chicken really is. He is one of Foghorn Leghorn's arch-enemies along with George P. Dog.

He appeared in thirteen cartoons of the original Looney Tunes series. In The Looney Tunes Show, Henery also made three appearances, as well as 2 appearances in songs, and made a cameo appearance in the film Space Jam.

Henery is a somewhat blustery loudmouth with an oddball accent who likes to eat chicken. While he is a chicken hawk who is hungry, Henery was occasionally shown to be evil and go beyond a simply hungry animal and has committed villainous acts such as constantly abusing Foghorn Leghorn a few times, abusing a turtle, stealing eggs and blowing up Barnyard Dawg's house. In The Looney Tunes Show, he was also shown to have an evil smile while trying to kill Foghorn Leghorn in the Chicken Hawk song.

Unlike most Looney Tunes antagonists who are animals that often fail to catch their prey (such as Wile E. Coyote and Sylvester), Henery has occasionally succeeded in capturing his prey (mostly Foghorn Leghorn). 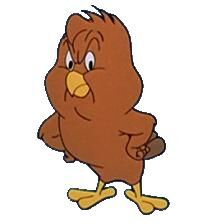 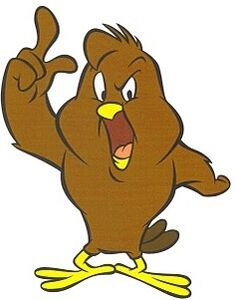 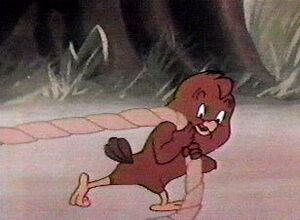 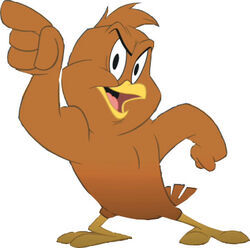 Henery in The Looney Tunes Show.