Driving people to insanity via crying

Keeping Henry from having affairs.

Henry's Baby, or "The Baby" for short, was the antagonist (according to some, competing only with the Woman in the Radiator for said role) of the 1977 surreal body horror film Eraserhead.

After Henry Spencer had gotten his girlfriend Mary X pregnant, the couple returned to the apartment with their baby. Their baby was snakelike in appearance, and he also resembled the spermatozoon-like creature that was seen in the first part of the film. The baby also had the habit of refusing any food that was offered to him, and he also cried continually. Eventually, Mary couldn't take the stress anymore, and she left Henry to care for the "child."

Whenever Henry tried to have an affair, the baby would always manipulate him into staying with him, and constantly mocked him for his attempt at finding a better life.

The baby eventually met its end when Henry discovered that the Woman Across the Hall was inviting men into her room, and when she saw him as his son rather than for him. Henry grabbed the scissors, and proceeded to cut the bundles that were wrapped around his child. He then discovered that his child only had two organs and he then proceeded to stab him in one of the organs. Blood and a white substance gushed out of his son's organ, and he began to react in pain. The lights then proceeded to burn out, and the child's head turned into the planet at the beginning.

Most people believe that the Baby represents fear. According to this interpretation, the Baby was actually a representation of the fears that Henry, the film's protagonist, had about becoming a father. This explains the grotesque appearance of his son, and it could possibly explain the rest of the film.

The Baby is also believed to be the result of consequences. Henry was known to let things happen, meaning that he chose not to take responsibility for his actions. He chose to have relations with his girlfriend and it resulted in the birth of his son. Now, he has to live with the responsibility of taking care of an unwanted child. 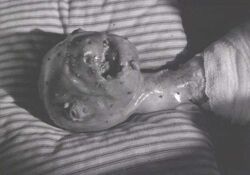 The Baby replacing his father's head.
Add a photo to this gallery 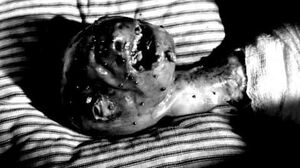 Eraserhead Analysis
Add a photo to this gallery

Retrieved from "https://villains.fandom.com/wiki/Henry%27s_Baby?oldid=3548828"
Community content is available under CC-BY-SA unless otherwise noted.