Knowledge of loyalty and betrayal

Pressuring women into prostitution and pornography as a way to make money.

Henry "Big Smile" Lee is the main antagonist of the 2012 video game, Sleeping Dogs. He is a prominent Sun On Yee Triad member and feared gang leader based out of Hong Kong. Lee is the biggest supplier of drugs in the city as well as being heavily involved with prostitution and contract killings. He is known for his temperamental, destructive, murderous, violent, and brutal tactics which is even beyond the limits of even other Triad leaders, these tactics include: Torture, castration, mutilation, and burying people alive.

He was voiced by the Hong Kong American veteran actor Tzi Ma.

Lee started his criminal career as an enforcer for the powerful Sun On Yee Triad. He at first took control of a small drug operation, which he then used to hook young and wayward girls on his product in order to get them under his control and pimp them out on the streets of Hong Kong. His large prostitution ring eventually caught the attention of pornography producers thus starting up another lucrative business deal by casting many of the unfortunate girls in big time porn movies. In just a few years Lee had become the highest earing gangster in the Sun On Yee, which led to his promotion to the high ranking position of Red Pole. Lee is also feared by almost all in the Triad and on the streets because of his reputation for violence and extreme brutality, his methods were seen as too brutal even by many hardened and high ranking Triad members, however because of his successful businesses and income he was allowed to run his operation as he saw fit. to enhance his fierce reputation Lee made Liu Shen Tong his top enforcer, a legendary gangster that was widely known and feared as a brutal sadist, an expert Assassin, and an interrogator.

Lee attempts to expand his businesses further by taking over fellow Red Pole Winston Chu's territory, he does this by backing and using Chu's rival Dogeyes Lin. This move created a civil war within the Sun On Yee between Dogeyes and Winston, resulting in many deaths and destruction of property on both sides. However, due to the arrival and intervention of undercover police officer, Wei Shen, Winston manages to repel all of Dogeyes's attacks and destroy a lucrative drug manufacturing plant.

Eventually the feud came to a close with the deaths of both Dogeyes and Winston and leaving the Triad Dragon Head Uncle Po, hospitalized. This Leaves Wei in charge of all of Winston's territory. Lee still wanting to expand his business, sends his right hand, "Ponytail" to demand a large percentage of Wei's profits, Wei refuses the offer and beats many of Lee's gangsters which once again begins a feud within the Triad. Later it is learned that Lee intends to become the temporary Dragon Head while Po recovers, however Wei and fellow Red Pole Broken Nose Jiang, foil this plan resulting in the appointment of another Red Pole, "Two Chin" Tsao. Not long the appointment of Tsao, Uncle Po dies, leaving a power vacuum in the Triad, Jiang has Wei scare Tsao out of town as she suspect Lee will have him killed for the position. With Po dead and Tsao in seclusion, the position of Triad Chairman is open, at Po's funeral, Lee attempts to bully his way into power, he is shot down however in favor of an election. This decision enrages Lee, since he knows he would never be fairly elected due to extreme and brutal tactics and began threatening other Red Poles to vote his way. Despite Lee's threats, Wei and Jiang are able to convince many of the Red Poles that Lee is not suitable for the position, this effectively cuts off all chances of Lee winning.

An enraged Lee retaliates by having Wei's best friend Jackie Ma, kidnapped by Tong and handed over to a rival Triad to be buried alive. Wei is able to save Jackie and thwart the attempt on his own life, however, Lee is not finished with him. It is eventually brought to Lee's attention, by corrupt HKPD officer, Thomas Pendrew, that Wei is an Undercover cop. With this information now in mind, Lee has Jackie kidnapped again but this time has him tortured and disemboweled by Tong, who then lures Wei to Jackie's corpse and kidnaps him as well. Lee then has Tong brutally torture Wei using a power drill and a scalpel. Lee was initially victorious heads to his restaurant where he begins his plans to kill Jiang and all of her supporters.

However, Wei manages to escape and kill Tong before confronting Lee at his business. A massive firefight then ensues, resulting in the deaths of all of Lee's men, including Ponytail, at the hands of the vengeful Wei. lee flees the shoot out and attempts to escape by boat, however, Wei follows and makes it aboard, just as he does Lee crashes the boat into a fueling station causing a massive explosion. Both men survive but sustain heavy injuries, Lee grabs his gun and prepares to execute Wei, before Wei knocks the gun from Lee's hand and engages in a fist fight with him. Wei gains the upper hand and beats Lee into submission, before picking him up and throwing him headfirst into an active ice chipper, which shreds the brutal crime lord form his head to his waist, killing him. Lee's death ends the Sun On Yee civil war and brings in a time of peace for the Triads and the streets of Hong Kong.

As the most powerful and most feared Red Pole in Sun On Yee, Lee relied on two things: his use of extreme violence and his immense cash reserves. Lee is truly obnoxious, aggressive, cantankerous, temperamental, short-tempered, argumentative, hot-blooded, opprobrious, pugnacious, and impatient, hence is quick to resort to torture and murder with a lack of restraint, in fact his use of violence was viewed as too far even by Triad standards, making him both feared and disliked by other triad gangsters and fellow red poles. Lee's financial empire is worth millions, though his business methods are ruthless, through his distribution of drugs, and ruin the lives of many women by exploiting them for pornography, prostitution, and occasionally human trafficking. Despite his brutality, Lee loves his family. He has several daughters that he is putting through college in the United States. Nevertheless, however, he is still a dangerous individual, even having gone as to force other women into prostitution for profit.

Lee is also extremely vituperative, confrontational, manipulative, egocentric, power-hungry, ruthless, selfish, cruel, sly, rude, greedy, and arrogant to the point that he sees himself as the natural successor to the Chairman. However Lee is aware that he is disliked by other red poles, hence isn't foolish and outrageous enough to leave his ascension to chance or an election. As a result, Lee has a complete disregard and disrespect for the rules and traditions of triad, and will do anything necessary for his own rise to power, even instigate civil war and working with the 18K to kill his fellow Sun On Yee comrades. 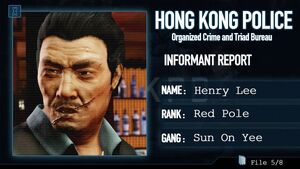 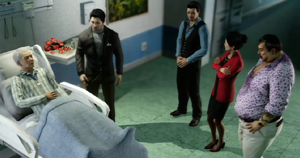 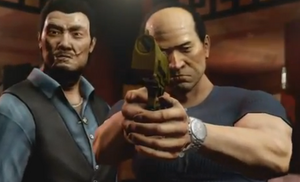 Big Smile Lee with his enforcer, Ponytail, after Wei confronted them at BigLee. 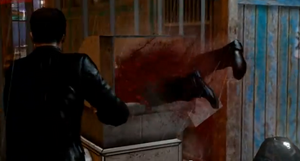 Big Smile Lee being chopped up by an ice chipper, after Wei defeated him in a fight.