Henry is a recurring antagonist in Klay World. He loves guns and will kill his own friends without mercy.

He was the titular main antagonist of Henry's Shotgun and its remake, one of the main protagonists of Knox's Klay World, a major character in Dr. Bob Saves The Day 3 and the secondary antagonist of Klay World: All Gone.

One day Henry was walking, when Dr. Bob gave him a shotgun. He showed it to his friends, and then started fooling around with it and killed them all but one.

Eventually, he got rid of it, so 3 of his friends got him a present; an Uzi. He kept fooling around, pretending to load it but he really did it and killed two of his friends. The other tried to wrestle the gun away from the insane Klayman, but Henry fired the gun but accidentally shot the top of his own head off. His friend decided to bring him to Dr. Bob, but he quit before he could treat Henry.

A few days later, Dr. Bob hosted a party, so he could secretly start violence that would end Klay World. Henry showed up to the party, but when violence did break out, he just stood there. Eventually, he found a minigun hidden by Dr. Bob in the salad. He used it to kill many Klaymen including the one who shot his head off. Then Dr. Bob shot him with a rocket launcher, knocking him off the table. Later, Dr. Bob shot and killed his friend Pick, and Chip prepared to kill him, but Henry reveals himself to have survived, and shot it at the table, knocking it over killing everyone but Dr. Bob, Chip and Chip's best friend Rick. Dr. Bob and Chip both survive by holding on to the side of the table and pulling themselves up. Rick survives the fall. Henry notices Dr. Bob and Chip on top of the table and calls them "two naughty Klaymen trying to be sneaky" and prepares to shoot the rocket launcher but Rick runs over sticks his arm in rocket launcher, causing in an explosion that kills him and Henry. Chip and Bob look at the spot were Rick gave his life to save him, and he prepares to battle to the death with Bob.

Henry is a generic-looking, blue Klayman. However, in Klay World: All Gone, he had stitches on his face that distinguished him from other Klaymen. He also wore a military helmet when he appeared in Knox's Klay World.

Henry is exceedingly violent and shows little concern for gun safety. He is often jumpy, yet also displayed a largely laid back personality in his earlier appearances. It was implied at first that he was accidentally killing his friends in Klay World: Henry's Shotgun. However, in Dr. Bob Saves The Day 3 and All Gone, he instead appeared to be blatantly killing his friends on purpose, meaning that he likely enjoys it.

Henry is a powerful individual, capable of surviving a rocket launcher detonation and being flung off the table, he also survived his head being shot off.

Henry fought the entirety of Klay World's Civilians and effortlessly fought them all day long, even having the energy after being burned, beaten and charred by a rocket to continue firing on the table, eventually knocking it over. 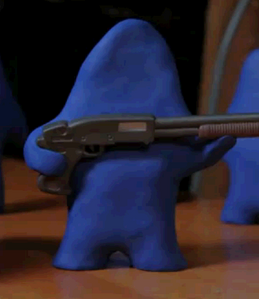 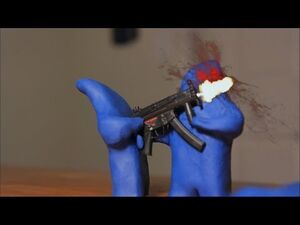 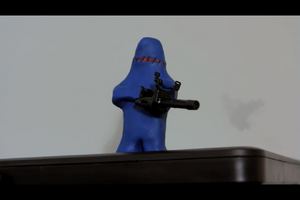 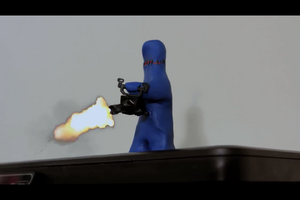 Retrieved from "https://villains.fandom.com/wiki/Henry_(Klay_World)?oldid=3889742"
Community content is available under CC-BY-SA unless otherwise noted.