Purify the gene pool to have the strongest Joker emerge (failed).

Henry Adams is the principal at McCallum University and one of the 5 people in Gotham still infected with Joker's blood. He is a supporting antagonist in the 2015 video-game Batman: Arkham Knight.

He is voiced by Garrick Hagon.

Prior to the game

After being infected with Jokers blood at a routine treatment at Gotham General he alongside Johnny Charisma, Christina Bell, and Albert King did not receive the cure from Batman due to hospital errors. While all of the others displayed symptoms of slowly turning into a new Joker, Henry, who was infected longest, showed no signs whatsoever.

He was approached by Batman who saw Henrys immunity to the Joker blood as the key to developing a cure. Henry cooperated and was brought to Batmans laboratory at Panessa movie studios where Robin tried to find the cure in Henrys blood. Though initially cooperative, Henrys patience wore thin as Robin was not able to find a cure. When Commissioner Gordon followed Batmans invite and visited the studios Henry begged him to release him because he wanted to return to his family.

Although it seemed that Henry was immune, he had succumbed to Joker's blood as the others. However, Henry feigned immunity to gain Batmans trust. Before following Batmans invitation, he met with Harley Quinn and revealed himself as the new Joker. At some point at the laboratory, he called Harley and told her how to invade the movie studios. He also told her to hit him, because that would gain him Batman's trust.

While Batman searches for the Cloudburst, he is called by Henry who tells him that something is happening at the movie studios, he is then struck at the head by Harley Quinn who releases all the other new Jokers from their cells. When Batman heads to the studio he finds Quinns thugs beating Adams. After teaming up with Robin Batman saves Henry and orders him to keep the room on lockdown while he and Robin search for the remaining Jokers.

After returning two of them, to the main room, Batman is called by a desperate Henry who claims that Harley is trying to get in the room. After fighting and beating Quinn, Batman return to the main chamber with Harley and the last Joker only to find out that Henry, who had only feigned immunity to Jokers blood, killed all the other Jokers. He tells Batman that he had overwritten the security at the studios, allowing Quinn to enter.

Much to Harleys distress, he also shoots the last Joker, claiming that in nature the strongest always wins and that he is purifying the gene pool to have the strongest Joker possible emerge as the victor. He prepares to shoot Batman but then sees in his eyes that Batman also is joker-infected. Realising that Batman would make a far better and stronger Joker than himself, Henry, after claiming that Batman is "going to be spectacular", once again purifies the gene pool by shooting himself in the head. 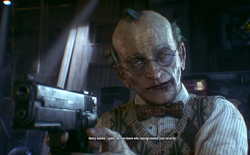 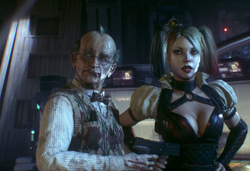 Henry forces Batman to stand down by taking Harley hostage

Henry kills himself to make Batman the unrivalised Joker 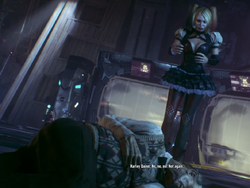