Captain of the Fancy

Leader of the Founders
Leading founder of Libertalia

Become the richest pirate in the world.

Create Libertalia so he could lure pirates onto the island so he could enslave them and steal their treasure.
Destroy the Colonists and their rebellion (all succeeded).
Kill the other Founders and escape with the treasure for himself (succeeded, but was killed in the process).

Captain Henry Avery is the posthumous overarching antagonist of the 2016 video game Uncharted 4: A Thief's End. He was a legendary English pirate and the leading founder of Libertalia, where his goal was to con every pirate into coming to his so-called paradise so he could enslave or kill them and steal all of their treasure for himself.

Henry Avery was born on August 23, 1659 in Newton Ferrers, England and later joined the Royal Navy. After eventually leaving the Royal Navy, Avery became the captain of the Fancy, originally named Charles II, seeking out riches for his own gain.

About 6 years ago in August 1695, Avery joined forces with other pirate captains, including Thomas Tew, and sailed to the Straits of Bab-el-Mandeb. Avery was elected as admiral of the pirate ship flotilla and commanded over 400 pirates, despite Tew being more experienced. Once there, they ambushed the Mughal fleet that was making its annual pilgrimage to Mecca. The treasure convoy was comprised of 25 ships, including the 1,600 ton flagship Ganj-i-sawai, better known as Gunsway.

The pirates eventually caught the Mughal convoy four or five days later. During the actual battle, only the Fancy, the Pearl (William Mayes), and the Portsmouth Adventure (Joseph Farrell) were present. Avery's opening broadside destroyed the mainmast of the ship, crippling it in the water. With the ship incapacitated, Avery and his crew boarded. Soon the crew of the Pearl joined them on the deck, and the pirates fought them for two to three hours.

Eventually, the Indians surrendered and Avery lost many of his crew in the raid as a result. The Gunsway was carrying nearly £600,000 (approximately worth now $18M and £13M) in precious metals and jewels. This ultimately made Avery one of the richest pirates ever.

Rise and Fall of Libertalia

Avery called on famous pirates of his time, Tew, Mayes, Farrell, Richard Want, Adam Baldrige, Anne Bonny, Christopher Condent, Edward England, Tariq bin Malik, Yazid al-Basra and Guy Wood. The twelve of them, collectively known as the Founders, travelled to an island near Madagascar and named it Libertalia. Avery gathered the greatest architects and engineers to build statues, elevators and houses all over the island, intending on making it a haven for pirates. The pirates then set up deadly tests in various locations in Europe and Africa to prove if any treasure hunters and pirates were worthy of joining them.

However, underneath all the glamour and promise of riches and freedom, Libertalia was revealed to be a trap to lure pirates to the island where they were captured, enslaved and/or killed before having all of their treasures stolen, essentially being Avery's greatest con ever. Over time, the civilians formed a rebellion and started a war with the Founders. In response, the Founders had all of the treasure moved from the vault to their mansions and battled the rebelling civilians. The war ended with the Founders killing almost the entire population by destroying the dams and starting a flood.

With the rebellion over, the Founders had all of the treasure to themselves. However, at this point, they all began to distrust each other as they were overcome with greed and paranoia, therefore started fighting each other. To put an end to it all, Avery had Tew invite the other Founders to his mansion to "abandon our animosities" and form a truce. However, what the Fonders didn't know was that Avery had Tew serve them poisoned drinks, resulting in their deaths. Avery, Tew and what remained of their allies then began moving the treasure to the Fancy. To make sure no outsider got to it, the pirates set up booby traps in and around the tunnels leading to the ship. However, Tew, feeling guilty for being forced to kill his fellow captains, started one last battle, resulting in the deaths of both armies.

Avery and Tew had one final battled inside the Fancy, but they eventually killed each other in combat. Dying of their wounds, their bodies rotted alongside the treasure as they were never discovered by anyone afterwards.

Despite being dead, Avery's influence could be felt throughout the entire island of Libertalia. As Nathan Drake journeyed deeper into the ruins, he and Elena Fisher became disturbed by the evidence surrounding how mentally unstable the Fancy's captain became and how the treasure had driven the Founders insane. During the final battle, his and Tew's remains were found by Nate, Sam Drake, Rafe Adler and Nadine Ross. As Nadine left the three of them to die in the burning ship, she pointed out that Avery, Tew and everybody's obsession with the treasure became their downfall. After Nate killed Rafe and escaped with Sam, the ship burnt down along with Avery, Tew and the treasure. 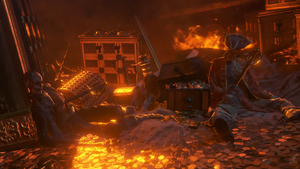 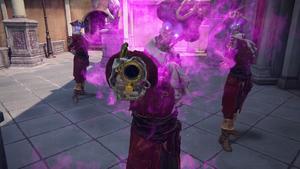 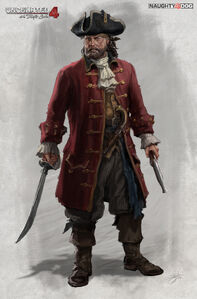 Retrieved from "https://villains.fandom.com/wiki/Henry_Avery_(Uncharted)?oldid=4311672"
Community content is available under CC-BY-SA unless otherwise noted.