Clock Tower 2: The Struggle Within

Providing Maxwell with patients for his research.

Kill Alyssa Hale and use as bait for the zombies to escape. (failed)

Dr. Henry Kaplan is a major antagonist in the 1998 videogame Clock Tower II: The Struggle Within. He is the director of the memorial hospital and an associate of George Maxwell, given him his patients from the hospital.

He was voiced by David Nowlin in the English version and by Akio Ōtsuka in the Japanese version and Drama CD.

Kaplan is appears to be in his 40's, with gray hair (his hair is brown in the official artwork). He wears a prussian blue business suit, wearing a light blue button shirt under the suit, with a tie with the same color as his business suit. He is also appears to be wearing a white lab coat.

He appears to be an insane person who is willing to kill anyone to escape from the zombies. This also shows him to be cowardly, due to being unwilling to fight the zombies himself.

Nothing known about Kaplan's past prior the story, other then he was the director of the memorial hospital and assisting the lab technician George Maxwell, providing him his patients for his experiments with his Cerebral Toxin.

While Alyssa wanders around the hospital, she enters into Kaplan's office and sees him in a corner cowering and manically laughs. Kaplan notices Alyssa, giving him an idea that he can use her as a distraction to the zombies so he can make his escape. He then proceeds to chokes Alyssa while saying "Hurry up and get eaten!" However, Bates kicks him onto the floor and continues to laugh manically.

Later, Alyssa enters the room again, seeing Kaplan standing in a corner, mumbling about Maxwell. While Alyssa asks him, Kaplan tells her plan about using her as bait for the zombies while he escapes. As Kaplan tries to strangle Alyssa again, he is shot and killed by Shannon Lewis, who stated she only did it so she wouldn't let Alyssa 'die so easily'. 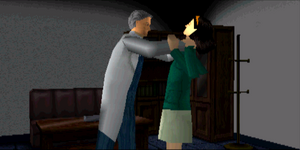 Henry being kick off by Bates.
Add a photo to this gallery

Retrieved from "https://villains.fandom.com/wiki/Henry_Kaplan?oldid=3312813"
Community content is available under CC-BY-SA unless otherwise noted.