Excentric Cult Leader
Sir Henry Stein is an antagonist in the third season of the series Legends of Tomorrow. He is the leader of the Order of the Shrouded Compass and is the great-great-grandfather of Martin Stein.

Like Martin Stein, he is portrayed by Victor Garber.

Stein is a successful actor living in London in 1895. For his life's work in acting, he was knighted. In addition to his life as an actor, Stein is also the leader of the Order of the Shrouded Compass, an aristocratic cult.

After the Order finds the time-displaced corpse of Damien Darhk, they plan to resurrect him. In order to keep the corpse fresh, the Order kidnaps people off the street of Whitechapel and drains their blood. Soon after, the Order is joined by the mysterious medium Madame Eleonor, who wants to assist them in Darhk's resurrection.

To find more victims whose blood he can drain, Stein and another member of the Order head to Whitechapel where they kidnap Nate Heywood who is acting as bait. When Stein approaches Nate, Nate is surprised and believes the old man to be his ally, Martin Stein. However, the truth is revealed when a henchman douses Nate with chloroform.

Nate is brought to the Order's hideout where he is strapped to a bed. Again, he mistakes Henry Stein for Professor Stein but Stein corrects him and states that it is "Sir Stein", arrogantly telling him that not every actor gets knighted. Stein says that thanks to Nate's blood, his master will soon make his return. Smilingly, he states that much more is to be done until this can happen and leaves the room. To find Nate, the group infiltrates a high-society gala hosted by Stein. While they are at the gala, Stein holds a speech and introduces the famed mystic Madame Eleanor. When Eleanor starts a séance, Stein partakes - as does Legends member Zari.

In the evening, the blood moon rises and the Order prepares for Darhk's resurrection. When Eleanor holds a speech, revealing herself as Damien's daughter Nora and claiming that her entire power is a gift from Mallus, the ceremony is interrupted by Rip Hunter and the Time Bureau. Darhk is resurrected nonetheless and attacks Hunter, and the Order, including Stein, attack the Time Bureau agents. During the battle, Stein draws a gun and attempts to shoot Zari but is stopped when Rip Hunter throws a grenade which temporarily freezes time. After the grenade has worn off, Stein realizes that the battle is lost and retreats. Given that he has a great-great-grandson, it is safe to assume that he successfully escaped and survived. 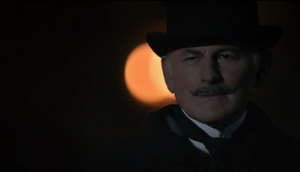 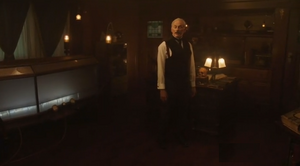 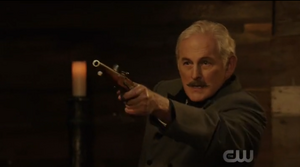