Make an easy $75,000, to pay off the loan shark Bruno Levine (succeeded until his death)

Anti-Villianous Mobster
Henry Tomasino is the tritagonist of Mafia II, and he also serves as a secret antagonist hero during the second half of the storyline after becoming an informant for the Federal Bureau of Narcotics. Henry Tomasino is a soldato for the Clemente Crime Family, and is a close friend of Luca Gurino.

He was voiced by Sonny Marinelli.

In 1945, Henry first meets Vito after being introduced to him by Joe. Henry tasks Vito with robbing gas stamps from the Office of Price Administration. He later assigns Vito and Joe with robbing a jewellery store belonging to someone who owes Luca money. The pair pull it off, and this puts them in good favour with Luca. Henry, Vito, and Joe are then ordered by Luca to kill Sidney Pen a former associate of the family. Henry and the pair manage to pull off the hit though Henry ends up getting shot in the leg by Pen. Vito manages to get Henry to El Grecco a doctor who treats him for his injuries. Unfortunately, Vito's earlier robbery of the gas stamps lands him in the big house where he remains until 1951.

Henry does however briefly call up Joe to warn him that Luca has placed the latter on his hitlist, and he advises Joe to skip town which he does.

In late 1951, following the downfall of the Clemente Family, Henry reunites with Vito, and asks to join up with the Falcone Family. Vito vouches for Henry, and he is sent by Eddie Scarpa to kill Leo Galente. Vito however prevents this from happening, and Henry out of respect for Vito allows Leo to leave town.

Later, Henry gets Vito and Joe involved in the drug trade in order to help Vito get out of debt. They get 35 thousand dollars from Bruno Levine a Mafia backed Jewish loan shark. They then use the money to purchase heroin from the Empire Bay Triads. Following the deal, they are attacked by several gangsters masquerading as police officers. They manage to survive the ordeal, and sell the drugs on the streets of Empire Bay before spending a night on the town.

Unbeknownst to Vito and Joe however, Henry had secretly become an informant for the Federal Bureau of Narcotics, and had been sent into the Falcone Family to gain information on Carlo Falcone. He had gone to the Feds shortly after Clemente's death, and made a deal with them. He would bring down Carlo and his associates to get revenge for the deaths of his friends and associates.

Two days after the drug deal, Henry phones Vito up, and asks for him and Joe to meet up with him in Lincoln Park as Carlo had found out about their deal, and had taken 60 grand from them. Upon arriving at the park, Vito and Joe are horrified to discover Henry on the floor being hacked into pieces by six meat cleaver wielding Chinese gangsters. Though Vito and Joe manage to kill the attackers: Henry still dies from his injuries.

Outraged by Henry's gruesome murder, Vito and Joe shoot up the Red Dragon Restaurant in Chinatown to get revenge. They confront Mr Wong the person who had sold them the drugs, and also the person who ordered Tomasino's murder over why he had had Henry killed in the first place. Wong informs that his contact in the Bureau had told him of Tomasino leaking information to them about the deal so he had him executed. Vito and Joe refuse to believe it, and Joe in a fit of rage murders Wong effectively avenging Henry's death in the process.

The shootout in Chinatown leads to the Empire Bay Triads going to war with the Vinci and Falcone Families. This causes utter turmoil on the streets of Empire Bay with the Triads and their boss Mr Chu desperate to uncover the culprits behind the shootout.

Two days later, Vito is picked up by Leo Galente and Mr Chu who know that he and Joe were responsible for the shootout in Chinatown, and that they had done so to avenge Henry's murder. Leo confirms Wong's previous allegation about Henry working for the Feds, and says that Henry's information has caused the Feds to step up their game, and clamp down hard on organised crime.

Vito is sent to kill Falcone in order for his life to be spared. Upon confronting Falcone, his main reason for wanting Vito killed was for bringing a rat into the family. 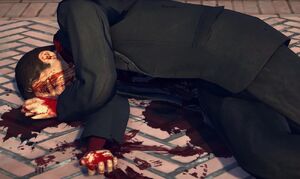 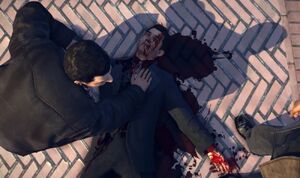 Henry's Tomasino death
Add a photo to this gallery

Retrieved from "https://villains.fandom.com/wiki/Henry_Tomasino?oldid=3999446"
Community content is available under CC-BY-SA unless otherwise noted.